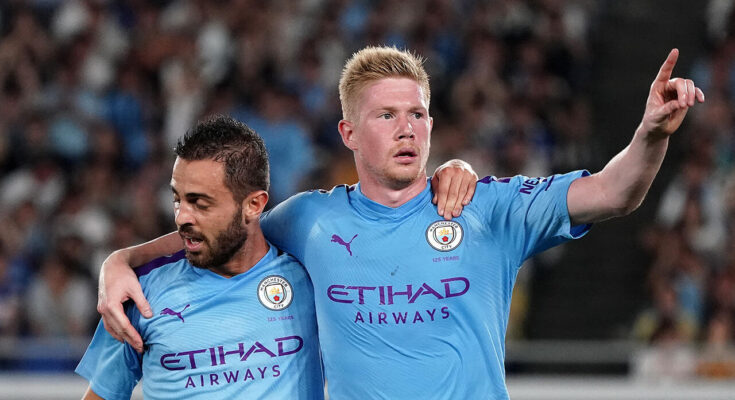 Manchester City midfielder Kevin De Bruyne has insisted he is not concerned by Barcelona’s interest in Bernardo Silva.

The Catalan side have long been keen to sign Silva and manager Xavi is believed to be pleading with those in charge at Camp Nou to find the funds needed to finally bring him in this summer.

Silva did his best to remain coy about his future and fans showered the Portugal international with praise and affection and chanted his name as he came off the bench in Saturday’s 4-0 rout of Bournemouth.

After the match, De Bruyne was asked about Silva’s future and he insisted that he believes the two will still be team-mates by the end of the month.

“I think he is very loved [by us] and he knows it,” said De Bruyne. “The way I see it, I think he will be here, so I have nothing to worry about.

“Whatever happens, he’s great for us and I expect him to be here with us this year.”

City boss Pep Guardiola has made it absolutely clear that he ‘100%’ wants to keep Silva beyond this summer, but has previously confirmed that he would not stand in the way of any of his players if they asked to leave the club.

However, City would be justified in demanding an astronomical fee for the 28-year-old, who has established himself as one of the game’s best midfielders in recent years.

Silva remains under contract until 2025, meaning City will not rush into a decision on his future this summer.