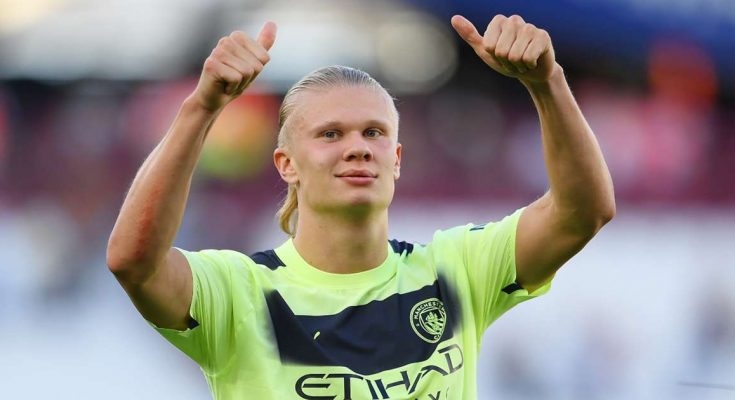 Erling Haaland felt he should have scored a hat-trick on his Premier League debut but was pleased to get off the mark for Manchester City.

Haaland scored twice for City in a routine 2-0 win against West Ham at the London Stadium on Sunday.

Borussia Dortmund’s pre-season signing opened his account after just 36 minutes when he converted the penalty after being brought down by Hammers goalkeeper Alphonse Areola.

He got his second 19 minutes into the second half when he latched on to Kevin De Bruyne’s through ball and slotted past Areola with ease.

West Ham offered little resistance, but Haaland was not surprised to see his new team in early, despite the disappointment of losing the Community Shield to Liverpool last week.

“As expected,” he told Sky Sports of the performance. “We saw the potential already against Bayern [Munich, 1-0 friendly win], against Liverpool it was a bit down, but that comes with games.

“It should have been more today, but yeah, good start.

Haaland felt strongly that he should have had more than his two goals, as shown by his choice of explicit language.

“I think if you saw [Ilkay Gundogan’s] chance before I left I should have been there, but I’ll take it.”

When asked by the interviewer to “hold his tongue”, Haaland replied: “S***, sorry.”

Pep Guardiola was satisfied with the contribution of his new striker and added: “The two goals were scored by Erling, it was important for him, for us, for everyone.”

The pace Haaland showed and the accuracy of his finish for the second goal drew comparisons to Thierry Henry on social media, and the apparent resemblance was even mentioned in Guardiola’s interview.

But after hearing the Norwegian criticize after his performance against Liverpool last week, Guardiola was somewhat desperate in his response.

“Obviously he has talent, but listen, a week ago when he missed chances [against Liverpool], he was ‘failed’… now is it going to be Henry or [Cristiano] Ronaldo?

“It takes time, it’s his first Premier League game, he’s 22, he’s got a long career [ahead of him] and when he retires, hopefully he’ll spend many years here at Man City, but we’re [only] going to analyse, what did he do. So take it easy.”