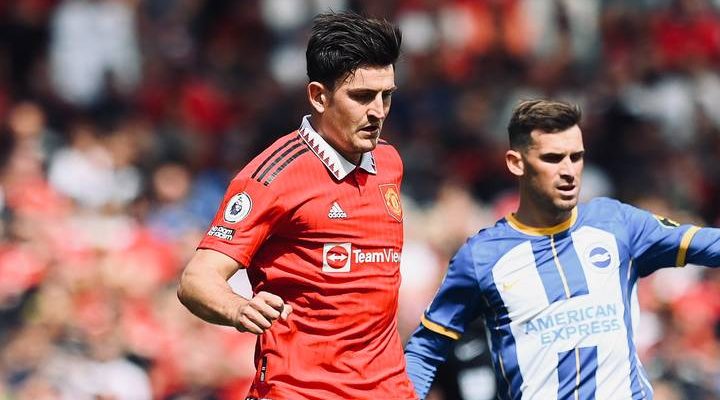 Manchester United began a new era at Old Trafford on Sunday, with Brighton seen by many as a kind first opponent, despite being beaten 4-0 by the Seagulls in May.

The Hag handed debuts to Lisandro Martinez and Christian Eriksen, but with Anthony Martial injured and Cristiano Ronaldo deemed fit enough to start on the bench, United lacked an attacking presence.

Two goals from close range by Pascal Gross put Brighton 2-0 up at half-time, and although a slightly improved performance from United led to a smashed Alexis Mac Allister own goal, the Red Devils were unable to equalise.

In the long term, the hope is that the Ten Hag will be able to implement a brand of football based on attacking possession, but there were few signs of it here.

Scott McTominay highlighted United’s poor possession and lack of control, completing just 19 passes with a completion rate of 67.9 per cent despite playing almost the entire game in midfield. Even goalkeeper David de Gea attempted (29) more passes than the Scottish international (28).

He told Sky Sports: “I think we started the game well, on the front foot and as a team we controlled the game.

“Then we conceded the first goal and that was a big hit. From then on we stopped playing, they were very much in control of the game.

“We have to look at not letting that first goal down so much, but we have to be better on the ball, we gave the ball away too often in the first half, especially after the first goal.” encouraging them to come forward and attack us. It was a nightmare start to be 2-0 down at half time.

“Everyone knew the task. We had a bad season last season, now we have a new manager who is trying to bring his philosophy to the team, but when we don’t succeed, we look too open.”

Specifically, on United’s failure to respond to Brighton’s first goal, Maguire added: “It’s something we have to address or it will happen again.

“The first goal felt like a big blow to all 11 of our players. We talked about getting another goal [at halftime].

“I think in the second half you saw good parts of our game, but overall we didn’t do enough. We had a lot of pressure and a lot of the ball, but we have to be a little more creative and we have to improve.” on it.”

It was Maguire’s first competitive game with new signing Martinez and while the Argentina international showed his ability, Danny Welbeck was delighted with both centre-backs.

Maguire agrees that forging the right partnership will require patience.

“It’s great to have Licha [Martinez] at the club. We’re competing for centre-back spots,” he said.

“We didn’t play much together and we weren’t on the same page in that first period. The centre-back partnership builds over time and we’ll improve a lot and keep a clean sheet.”