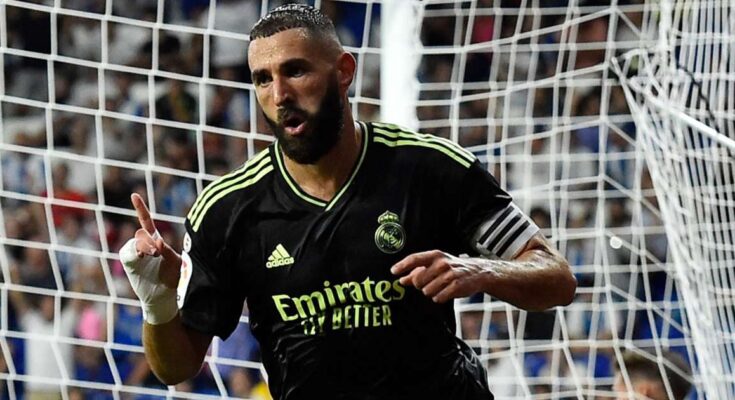 Captain Karim Benzema scored twice in a wild finish as Real Madrid won 3-1 at Espanyol to preserve their 100 per cent record after three games of the LaLiga season.

Vinicius Junior’s neat finish was canceled out by a goal from Joselu, who has made a habit of scoring against Madrid since spending three years early in his career with the capital club’s ‘Castilla’ B team.

Benzema had a goal ruled out after the break, while Joselu almost grabbed another before Benzema turned in Rodrygo’s cross to grab the points. Espanyol goalkeeper Benjamin Lecomte was sent off in stoppage time and Benzema added his second from the ensuing free-kick as the game ended in chaos.

The result means Madrid move level on nine points with Real Betis, another rival of Carlo Ancelotti’s side and the only other side with a perfect record.

Vinicius fired Madrid into the lead in the 12th minute, meeting a clever pass from Aurelien Tchouameni close to the penalty spot and slotting a first-time shot past Lecomte into the bottom left corner.

However, Espanyol struck next, equalizing in the 43rd minute. Joselu took Oscar Gil’s through ball on board and scored at the second attempt after Courtois made an initial save, the ball deflecting kindly off Eder Militao for the home striker.

Joselu was again at the center of drama in the penalty area just before the hour mark when Courtois had to make a desperate save with his left foot in the middle of the scramble.

Lecomte parried a 20-yard curling strike from Benzema at the other end before the Madrid talisman and captain had a goal ruled out for offside after nudging a low ball from Toni Kroos.

As the game entered its closing stages, Benzema met Rodrygo’s expertly crafted cross from the left as he volleyed home from close range at the far post to thoroughly deflate the visitors.

There was still time for more drama, with Lecomte red carded in stoppage time for a wild tackle on Dani Ceballos just outside the penalty area. Benzema fired a free-kick from 20 yards past goalkeeper Leandro Cabrera, the captain and defender, who missed it.