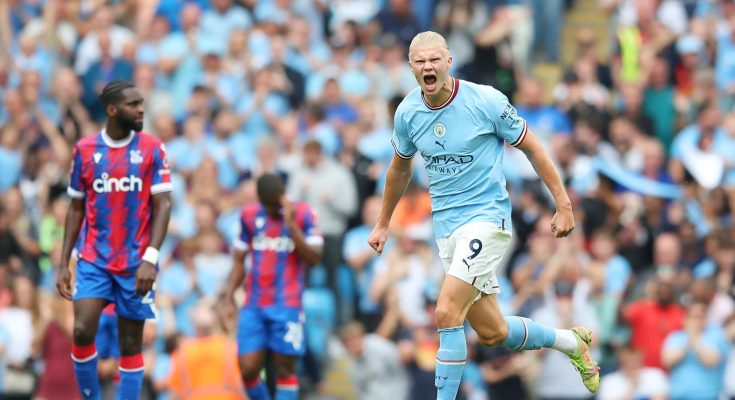 Manchester City striker Erling Haaland has warned the rest of the Premier League that the best is yet to come after he bagged a hat-trick against Crystal Palace on Saturday.

Haaland took his tally for the season to six from four games with goals in three seconds as City came from 2-0 down to run out 4-2 winners.

“Obviously you can see on the pitch that I’m enjoying it and I feel the connection around me,” Haaland admitted after the match. “Obviously it takes time, but I know it will come and it will get even better. And that feels good.”

The Norway international also took the opportunity to poke fun at team-mate Phil Foden, who assisted Haaland’s first goal after facing criticism for failing to pass the 22-year-old in recent games against Bournemouth and Newcastle.

“Finally Phil played me the ball!” he joked. “It’s a really good feeling, this. We played for each other, we played together and that’s really good. We don’t care who scores, it’s about winning and winning mentality.”

Haaland has had some sublime goals during his time in Manchester but admitted his main priority is to score more Premier League goals than his father Alf-Inge, a former defensive midfielder who managed 18 in 181 games for City, Leeds United and Nottingham Forest.

“It’s a proud moment for me and my family, but my dad will probably say he’s had more goals in the Premier League than me, so I’ll be chasing it,” he added.

“It felt really good to turn the game around. We had the mentality to believe in ourselves and keep going. We were almost there in the first half, so after that it was just a matter of getting it done. It feels good.”

“It’s not easy to come to a new club, a new country, so it was a good start.