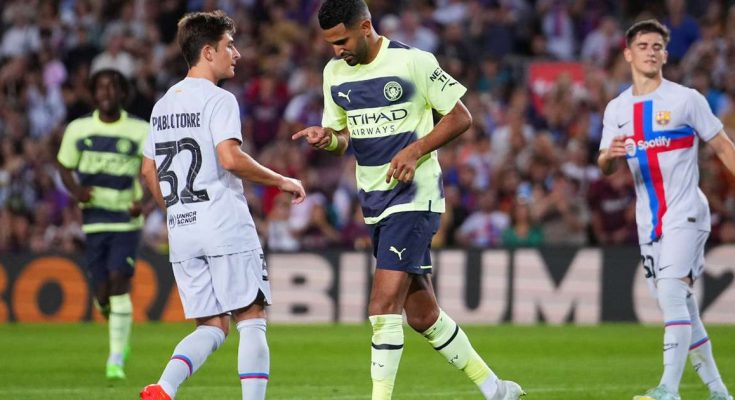 Barcelona and Manchester City drew 3-3 in a thrilling friendly at Camp Nou as Premier League-linked Frenkie de Jong and Pierre-Emerick Aubameyang both bagged for the hosts.

Chelsea-linked Aubameyang should have given his side an early lead but his close-range header from Sergi Roberto’s cross was straight at Stefano Ortega.

The Spanish side started the match impressively but fell behind after 21 minutes. City new boy Julian Alvarez capitalized on a mistake by Barca goalkeeper Inaki Pena to slot home.

However, the lead lasted just eight minutes as Aubameyang made up for his earlier miss with a back-post volley that slipped under Ortega.

City should have restored their advantage early in the second half, with Alvarez missing a great chance to get his second of the game after several efforts were thwarted before Riyad Mahrez shone.

De Jong, a target this window for visiting city rivals Manchester United, put Barca 2-1 up in the 66th minute with a smart finish past Ortega.

Xavi’s side were back in front after 11 minutes when Memphis Depay found acres of space in the box to smash the ball into the back of the net.

However, they fell short of the win with minutes remaining as Andreas Christensen fouled Erling Haaland in the box before Mahrez slotted home the resulting penalty to earn his side a share of the spoils.