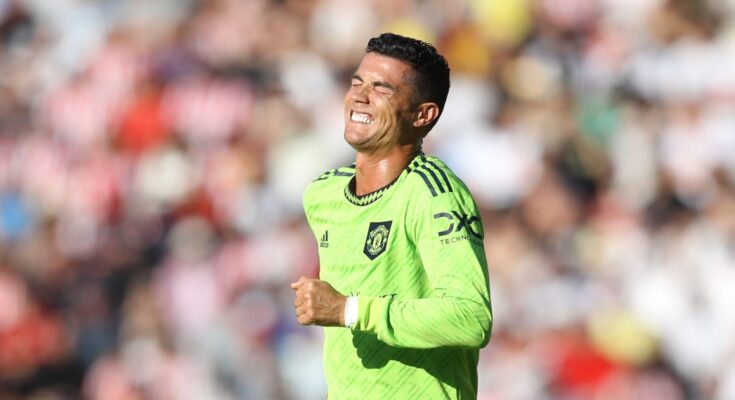 Cristiano Ronaldo refused to acknowledge travelling Manchester United fans despite Erik ten Hag‘s assistant coach Steve McClaren reportedly asking him to applaud them after their 4-0 defeat away at Brentford.

Josh Dasilva, Mathias Jensen, Ben Mee and Bryan Mbuemo netted one each to lead the Bees to a thrashing of the Red Devils on Saturday.

According to the Manchester Evening News , Ronaldo and McLaren were spotted on the sidelines debating at full-time before the former walked down the tunnel to the dressing room.

Manchester United have now lost both of their first two games of the season under new manager Ten Hague.

Ronaldo had previously submitted a transfer request, missing a large part of the team’s pre-season training.

The Portuguese star was named in the starting line-up and played the full 90 minutes at the Gtech Community Stadium. However, he could not prevent his team from losing to Brentford.

Ronaldo insulted Manchester United fans, but some players headed towards the fans after the final whistle.

Captain Harry Maguire did not cross over to the traveling fans but applauded them from a distance.

Meanwhile, TV pundit Gary Neville hit out at the club for failing to bolster the squad with solid new signings this summer.

“Manchester United have known for eight to 10 months that they needed to rebuild their squad for the summer,” he told Sky Sports.

“Ralf Rangnick described it as open heart surgery. Not getting players on time – the quality of players, the number of players – is confusing and hard to forgive.”

“It’s not a stagnant market – the teams have their work cut out for them. Every club seems to have a plan and Manchester United look like ‘let’s just look at the Dutch league or the players who were under Ten Hag’.”

“That’s not a strategy – you can’t do that. That was 15 years ago. You have to have identified players and the work was done with the agents.”