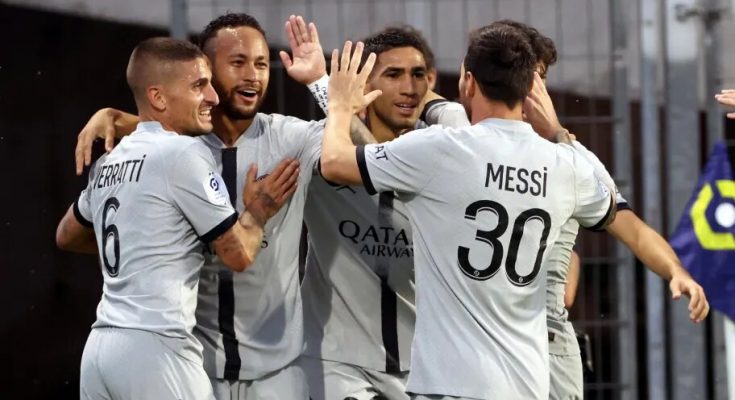 Paris Saint-Germain’s defence of their Ligue 1 title got off to the perfect start with an emphatic 5-0 win at relegation favourites Clermont Foot.

Christophe Galtier’s first league game in charge of the Parisians could hardly have gone better as PSG ran out convincing winners at the Stade Gabriel Montpied.

After Clermont’s quick start, PSG almost took the lead when Neymar met Achraf Hakimi’s low cross, but Alidu Seidu slid back across the penalty area to make a block.

However, the mercurial Brazilian only needed a second chance to find the net as the champions took the lead in the ninth minute. Pablo Sarabia almost kept a long ball behind him alive and it was brought down by Lionel Messi and into the path of Neymar, who finished confidently from 20 yards.

Debutant Vitinha had an effort from a similar distance just after Hakimi had doubled the lead on a quick counter-attack, with Messi and Neymar combining before the Brazilian turned the full-back to fire into the roof of Mory Diaw’s net.

Diaw produced a stunning save to turn away Sergio Ramos’ header from a corner minutes later, although he was unable to deny Marquinhos as he nodded Neymar’s free-kick.

Clermont almost equalized after the break when Komnen Andric turned and fired a rocket into the top corner, but it whistled wide of the post.

Nuno Mendes nearly had his first PSG goal when he bustled through the box to meet Hakimi’s deep cross, but Diaw threw out a hand to keep him out.

The visitors almost literally went for their fourth when Lionel Messi and Neymar danced into the Clermont area, with the latter rolling it back across goal for his Argentina team-mate to tap in.

Lionel Messi grabbed his brace with minutes left on the clock after meeting a clever dink over the top from Leandro Paredes, finding the net with a wonderful overhead kick.

Juan Bernat and Messi were kept out by Diaw in the dying embers as the game ended with no extra time to put Clermont out of their misery.