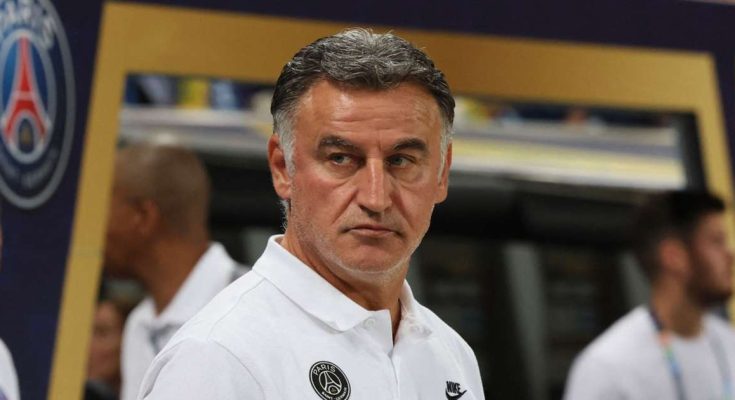 Paris Saint-Germain boss Christophe Galtier is not remotely surprised by the stunning start to the season his side have made.

The Ligue 1 champions beat Lille 7-1 at the Stade Pierre Mauroy on Sunday thanks to a hat-trick from Kylian Mbappe, Neymar and a Lionel Messi strike.

Mbappe’s first came after just eight seconds, the fastest goal in Ligue 1 since Opta began recording data for the competition in 2006-07.

The result means PSG have scored 17 goals in three Ligue 1 games this season. Only Rennes in 1950-51 (18) found the back of the net more often in the same spot.

The win also meant they became the first team in Ligue 1 history to score at least three goals in six consecutive away games.

Galtier, who joined the club from Nice in July, has been impressed with his new side’s start to the season, but given the strength of their pre-season campaign it was no surprise.

Asked if he expected his team to be so dominant at this stage of the season, Galtier said: “Yes, because of the work we’ve done since July. Those who came back ahead of schedule prepared well before the season.”

“I saw players who wanted to start the season very strongly, so I’m not surprised.

Galtier stressed that his team will not be complacent after a breathless start and said he will use the full depth of his squad to keep the players on their toes.

Asked how they manage to maintain this form, Galtier said: “The answer is simple: the daily demands. It’s also important that everyone can be involved in the sequence of matches.

“You will have to agree to give up your seat so there can be a partner. Management will be important and any exchanges I will have with the group will be very transparent, clear and precise.

“The players can also get a bit of revenge for last season. The group has to be able to live well together. We need happy and committed players in the dressing room.”

PSG will be next in action on Sunday when Monaco visit the Parc des Princes.