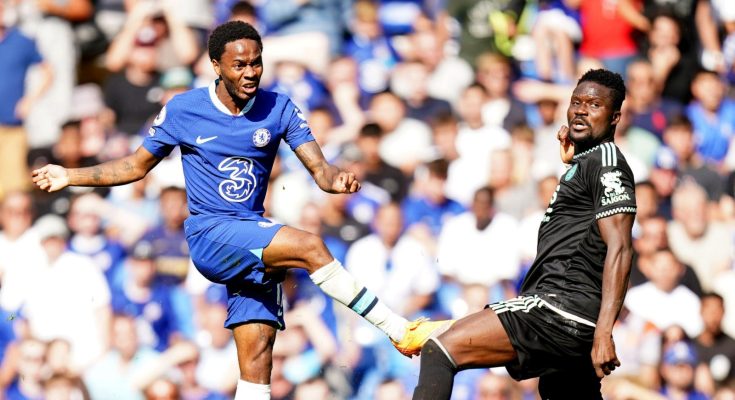 The former Manchester City forward opened his account at Stamford Bridge in the second half to get Chelsea back to winning ways in the Premier League.

Thomas Tuchel – who served his ban on the touchline and watched the match from the stands – saw his side beaten 3-0 at Leeds United last week and looked set for another tough day when Conor Gallagher was sent off.

However, Leicester’s latest poor display saw them slump to a third defeat in four league games and they only responded through Harvey Barnes after Sterling had struck twice.

Chelsea started brightly but had their penalty disallowed after a VAR review as Kai Havertz strayed offside before Youri Tielemans headed home Loftus-Cheek, who had earlier been denied by Danny Ward.

Just before the half-hour mark, the home side were reduced to 10 as Gallagher received two yellow cards in just over six minutes, the second for a foul on Barnes.

Leicester thought they had taken the lead when Daniel Amartey pushed them in, but the goal was disallowed after Barnes fouled Edouard Mendy while Reece James rattled the bar at the other end.

It was Chelsea who were in front two minutes into the second half when Sterling’s 20-yard effort flew past Ward via a deflection from Amartey.

Sterling was denied soon after, but touched on James’ low cross from the right in the 63rd minute.

Leicester responded three minutes later when Barnes fired past Mendy at his near post, but they then wasted plenty of chances to equalize as Ayoze Perez went closest when he hit the underside of the crossbar.