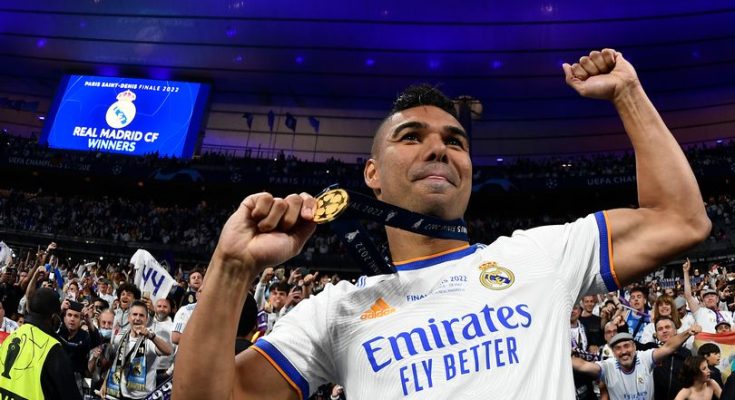 Manchester United have agreed personal terms in principle with Casemiro and are moving closer to signing the Brazilian midfielder from Real Madrid.

Manchester United made a move for the 30-year-old multiple Champions League winner this week and are prepared to pay €60m plus €10m to complete the deal. The transfer is expected to be completed in the coming days and a medical check should take place within the next 24 hours.

90min reported on Thursday afternoon that the player is to be offered a five-year contract – the contract is now four years with an option for a 12-month extension. He is set to earn up to £400,000 a week, including bonuses.

Casemiro did not feel marginalized at Madrid following the signings of Aurelien Tchouameni and Eduardo Camavinga last year, but is eager for a new adventure after winning everything there is to win at club level with Los Blancos.

Real Madrid have been planning the new season with the player, but Casemiro has been keen to play in England for some time and has jumped at the chance – even though United are bottom of the Premier League table after two games. Real’s respect for Casemiro and his wishes made the deal relatively easy to proceed with and they didn’t want to stand in his way.

Real Madrid manager Carlo Ancelotti confirmed this when speaking to reporters on Friday morning when he said of the transfer: “We spoke this morning. He wants to try a new challenge, a new opportunity. I understand that, so does the club.

“Given what he has done for this club and for this team, we have to respect that. There are talks between the clubs. He is still a Real Madrid player, but it looks like he is now willing to leave.”

“We didn’t try to convince him to stay. I respect him.”

Casemiro will not be available for Manchester United’s next Premier League game against Liverpool, although he may make his debut in next weekend’s trip to Southampton.

As reported on Thursday night, Manchester United made a fresh bid for long-term attacking target Antony this week, although their bid was rejected as Ajax await a club-record £78million sale. It remains to be seen whether United will follow up on their interest in one of their preferred signings, Erik ten Hag, although they have an alternative option in PSV’s Cody Gakpo.

Gakpo is understood to be an option United feel they can sign quickly once an approach is made. No deal for the Dutchman, should United decide to pursue him, will be finalized before PSV’s Champions League fate is decided for the coming season. PSV play Rangers on Wednesday night with a place in this season’s group stages on the line.