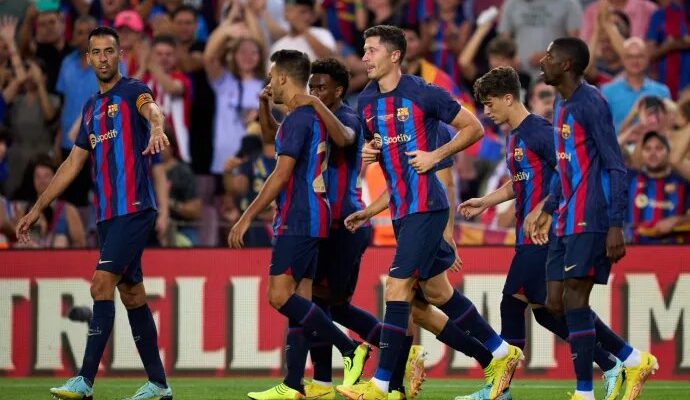 Barcelona won the friendly Joan Gamper Trophy with a resounding 6-0 win over Liga MX side Pumas UNAM on Sunday evening.

The match marked Dani Alves’ return to Camp Nou just months after leaving Catalonia for Mexico. He was given a standing ovation by the crowd of more than 80,000 before kick-off and received a commemorative shirt and shield.

Robert Lewandowski scored his first home goal for the Blaugrana after just three minutes when he ran onto Pedri’s skilful dink, rounded goalkeeper Julio Gonzalez and found the top of the net from a tight angle.

The lead was doubled shortly afterwards when Lewandowski this time turned the provider on Pedri, picked out his drive into the penalty area and scored in almost identical circumstances to the Pole, leapfrogging Gonzalez and tucking in.

Barcelona added a third after 10 minutes when Raphinh’s low cross was stroked into the bottom corner by Ousmane Dembele and another nine minutes later found Pedri who again found the net following a clever piece of skill from Lewandowski.

The Barça faithful had to wait until the start of the second half to watch their side complete the fifth of the evening when Pierre-Emerick Aubameyang headed in Ansu Fati’s cross.