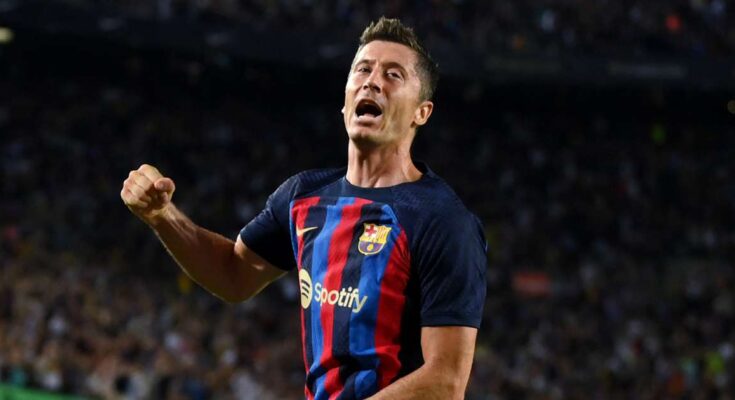 Robert Lewandowski struck a brace for the second game in a row as Barcelona strolled to a comfortable 4-0 win against Real Valladolid.

In the game, Jules Kounde made his long-awaited debut for the club following his move from Sevilla, after his registration was delayed, but it was another of Barcelona’s signings who stole the show.

Poland international Lewandowski struck in both halves of Sunday’s game at the Camp Nou, the first finishing with a poacher at the far post and the second with a deft backheel.

Pedri and Sergi Roberto were also on the scoresheet for Xavi, who are unbeaten in LaLiga with seven points from a possible nine.

The home team started strongly, but the frame of the goal let them down. Lewandowski headed the post before Ousmane Dembele smashed a fierce effort onto the crossbar.

However, there was a breakthrough in the 24th minute, Lewandowski getting to the far post and slotting home Raphinh’s inviting cross.

It was two before the break, Pedri finding space around the box to comfortably head Dembele’s pass past a helpless Jordi Masip.

Barcelona’s dominance continued in the second period as they boasted 66 percent of possession on the hour mark, and while fans had to be patient for the third goal to capitalize on their dominance, it was worth the wait.

Dembele cut inside from the right to pass to Lewandowski, who expertly finished past his keeper and goalkeeper – making it four goals in three games for his new side.

Lewandowski was denied a hat-trick in stoppage time, striking the crossbar from close range, but Sergi Roberto was on hand to knock down the rebound.