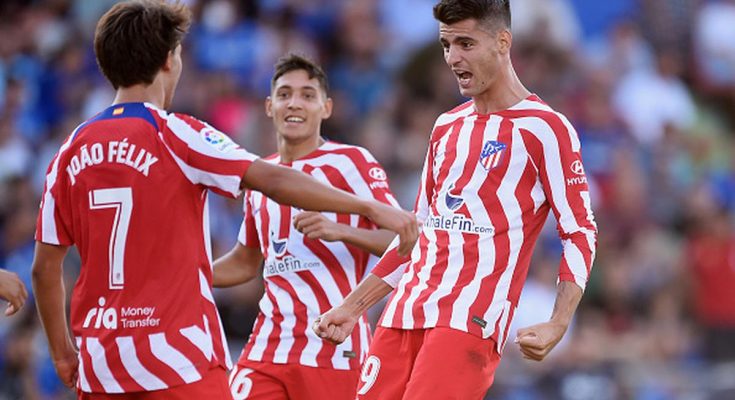 Diego Simeone says “things come naturally” to Joao Felix after he starred in Atletico Madrid’s season opener win over Getafe, though the Argentine admitted that Alvaro Morata’s future is out of his hands.

The duo starred for the Rojiblancos as they helped guide their side to a 3-0 win on Monday night, with the former notching all three assists and the latter netting the equaliser.

It marked an impressive return to the pitch for Atlético for both, with Felix spending the end of last season sidelined with injury and Morata spending the previous two campaigns on loan at Juventus.

Felix, in particular, put in a performance that showed his growth for Simeone, who said the Portuguese star’s talent was helping his game speak for itself.

“He looks more mature, stronger,” he declared. “He showed it last season until he had to leave due to injury. He’s growing, [he’s] showing maturity, [he’s] seeing more than others.

“You don’t have to force anything. Things come naturally and he’s worked to get to this point. He’s got the talent, he’s got the goal and hopefully he can back up everything he says here on the pitch.”

Morata famously signed for Atlético following his move from Chelsea in 2020, only to be immediately loaned back to former club Juventus for the following two seasons.

The topic of his future remains up in the air after the end of the transfer window, with Simeone admitting he does not know what the Spain international’s next steps will be, although he hopes the star will stay.

“I’m not the owner of the club, I’m the coach,” he added. “He is doing very well, he is working in an extraordinary way and we hope that Morata will continue with us.

“I think all footballers have to have the confidence to do important things. He came with humility, the will to work without demanding anything, he tried to get into that shape and that’s what we want to see.”