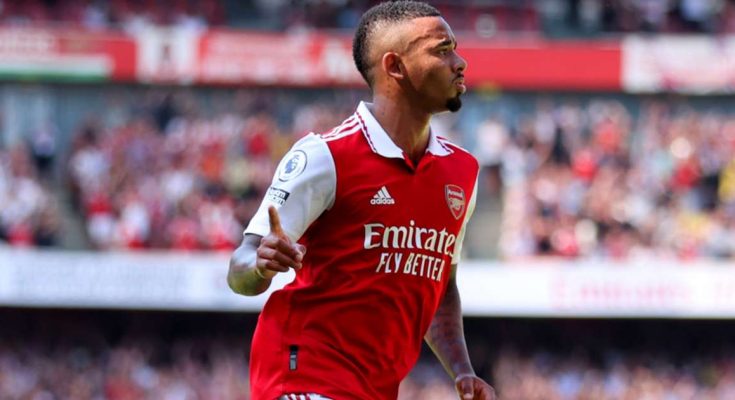 Gabriel Jesus scored twice and set up another two goals as Arsenal made it two wins to start the Premier League season by beating Leicester City 4-2.

Jesus impressed on his Gunners competitive debut against Crystal Palace without getting on the scoresheet, but the former Manchester City forward delivered the goods on Saturday to make up for Arsenal’s questionable defence.

The Brazil international’s brace put Arsenal ahead in the first half and he capped a fine display with two second-half assists after Arsenal had twice given Leicester some hope.

Granit Xhaka scored Arsenal’s third goal after a William Saliba own goal and after James Maddison fired through the legs of Aaron Ramsdale to make it 3-2, Jesus set up Gabriel Martinelli to complete the scoring.

Leicester saved a post in the 20th minute when Xhaka headed against the crossbar, but their luck ran out when Jesus’ deflected effort curled past Danny Ward.

The Irish led 2-0 in the 35th minute, Jesus doubling his tally with a nod from a corner.

With Jesus twice close to a third, Leicester thought they had a lifeline when Jamie Vardy went down under pressure from Ramsdale, but referee Darren England overturned his decision to award a spot-kick after a VAR review showed there had been little contact.

Salib’s mistake – an inadvertent header beyond Ramsdale – gave Leicester a way back into the match, but they conceded again just 106 seconds later.

Ward spilled what should have been a simple catch and Xhaka was on hand to sweep home from Jesus’ release.

Maddison’s sharp shot and poor goalkeeping from Ramsdale dragged Leicester back into the game with 16 minutes remaining, but Arsenal struck quickly again – Martinelli slotting home from the edge of the box.

Jesus hit the post with a gaping goal as a chance for a hat-trick, but his key contribution on his home Premier League debut for the Gunners sealed all three points.