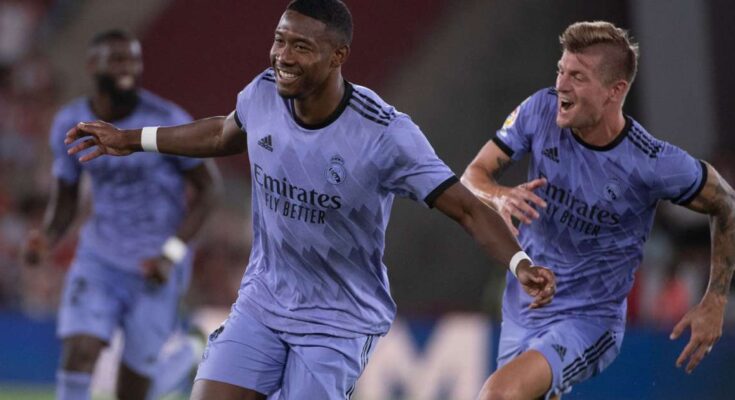 Substitute David Alaba scored a stunning free-kick with his first touch as Real Madrid started their LaLiga title defence with a 2-1 turnaround win over Almeria on Sunday.

Carlo Ancelotti’s side got off to a poor start at the Power Horse Stadium in Andalusia, falling behind inside the opening 10 minutes thanks to a clinical finish from former Manchester United youth player Largie Ramazani.

Madrid struggled to find a way past an inspired Fernando Martinez in the Almeria goal before Lucas Vazquez, whose effort was ruled out for offside in the first half, finally equalized for Madrid just after the hour mark.

Alaba replaced Ferlando Mendy in the 74th minute and took his first touch to curl a wonderful free-kick past Fernando from 25 yards to seal all three points.

Madrid’s defense was caught off guard in the sixth minute when Ramazani latched on to Inigo Eguaras’ superb ball over the top and fired past Thibaut Courtois from just inside the penalty area.

At five minutes and 50 seconds, it was the fastest goal Madrid had conceded on the opening day of the league season since Sergio Aguero scored against them for Atletico Madrid in August 2007.

Los Blancos had a whopping 17 shots before the break, but a combination of clever goalkeeping from Fernando and uncharacteristically wasteful finishing from Karim Benzema and Vinicius Junior prevented them from finding an equaliser.

Fernando continued to frustrate Madrid after the break, denying Benzema with a fine save, but was eventually beaten in the 61st minute when Vazquez tapped home after the Almeria keeper had kept out Vinicius’ effort.

Alaba then ensured Madrid returned to the capital with maximum points, slotting past a helpless Fernando immediately after entering the action.

What does it mean? Madrid bounced back to deny the plucky hosts

Almeria had won just one of their 12 games against Madrid in LaLiga before Sunday’s clash, but looked like they could pull off a famous victory thanks to Ramazani’s early strike and inspired goalkeeping from Fernando.

But Vasquez and Alaba had other ideas as Los Blancos extended their unbeaten run on the opening day of LaLiga to 14 games.