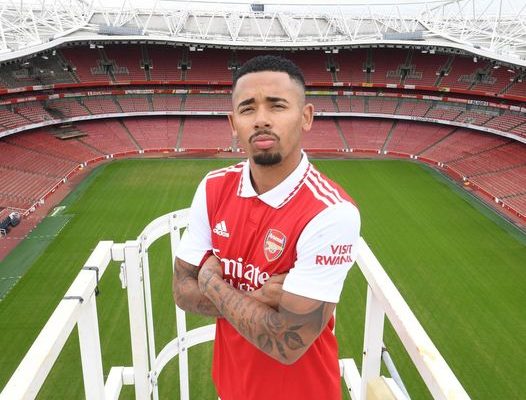 Gabriel Jesus has thanked everyone associated with Manchester City and says “it is time to live a new dream” after completing his move to Arsenal.

The Brazilian has spent five and a half years at the Etihad Stadium and has scored 95 goals in 234 City games in all competitions.

However, following the arrival of Erling Haaland and Julian Alvarez, Jesus chose to leave the club on a £ 45million deal.

Arsenal have confirmed Jesus’ signing of a long-term deal on Monday, and the 25-year-old has taken to Twitter to pay tribute to City.

“Thank you Man City and all the people who have made this club my life all these years,” he said. “Time to live a new dream!”

Jesus becomes Arsenal’s fourth player to sign for the window following the arrival of Matt Turner, Marquinhos and Fabio Vieira.

He had a strong end in the 2021-22 campaign as City continued to retain the Premier League title – one of 11 trophies won during a stint at Manchester.

And the Palmeiras school product feels like he is leaving City as a better player than he arrived at a young age in 2017.

“It has been a pleasure to play for Manchester City,” he told the club’s website. “I feel like I’m a better player now than when I first came.

“Winning 11 trophies has been amazing. My four Premier League titles are very important to me.

“I want to thank everyone at City – the manager, colleagues and fans – for all the support they have given me over the past five and a half years.”

Jesus, who will be wearing the number 9 shirt at the Emirates Stadium, has been thanked by City football director Txiki Begiristain for his work on the team.

“Gabriel is a great player and I want to thank him for what he has given Manchester City since he came here in 2017,” said Begiristain.

“His hard work and dedication to this team is beyond doubt. He has been a brilliant servant and I have no doubt he will continue to be successful.”