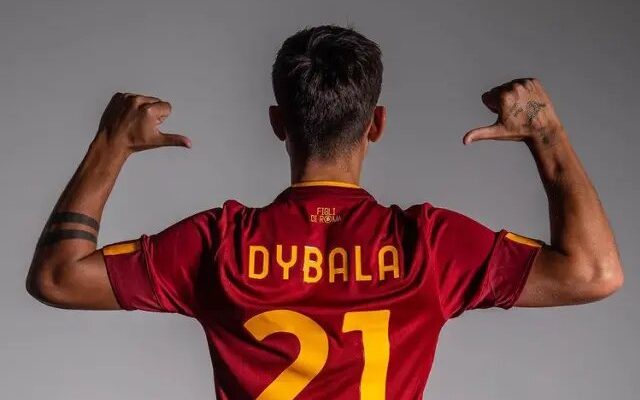 Paulo Dybala began life as a Roma player by insisting he bore no ill feeling towards Inter once his expected switch to San Siro failed to materialise.

Argentina forward Dybala has joined Roma on a free transfer after his contract at Juventus expired, with the 28-year-old confident the main club are becoming an increasingly powerful force.

Inter appeared to be an option for Dybala following his departure from Juve, but Nerazzurri chief executive Giuseppe Marotta said last week that the club had “no space” and “no need” to complete the deal. They brought in Romelu Lukaku and Henrikh Mkhitaryan during the final season.

“I didn’t feel betrayed,” Dybala said at the presentation media conference. “Since the end of my contract with Juve, I have spoken to some teams more than others. I have a good relationship with Marotta.”

He said he wouldn’t celebrate if he scored in games against Juventus and refused to talk about the Serie A title challenge – quite rightly so. Roma came home sixth in the league last season, finishing 23 points behind champions Milan.

“Roma have won a very important trophy and they want to have ambitions for the future,” said Dybala. “Roma have grown with the coach and the players. Our aim is to win game by game, then later we will see where we are. Right now there are teams for the Scudetto in front of us, we have to work to do well.

“I know there’s a lot of desire, but it’s too early to talk about it. But I like to win.”

So is Jose Mourinho, Roma’s head coach, who will be expecting big things from Dybala.

Dybala scored 15 goals and provided six assists in 38 games across all competitions last season, a big step in the right direction after a disappointing 2020-21 effort (five goals, three assists in 26 games).

Now Dybala must use his attacking skills to create play.

“Mine and the company have shown me seriousness, enthusiasm, awareness,” Dybala said at his presentation on Tuesday. “When I knew how Roma build, I didn’t have much doubt about the selection.

“It’s up to the coach to decide where I play, wherever is best for the good of the team. I’m ready to play where he thinks it’s best. Talking to Mourinho before I moved here was a great pleasure, all our talks were very productive.”