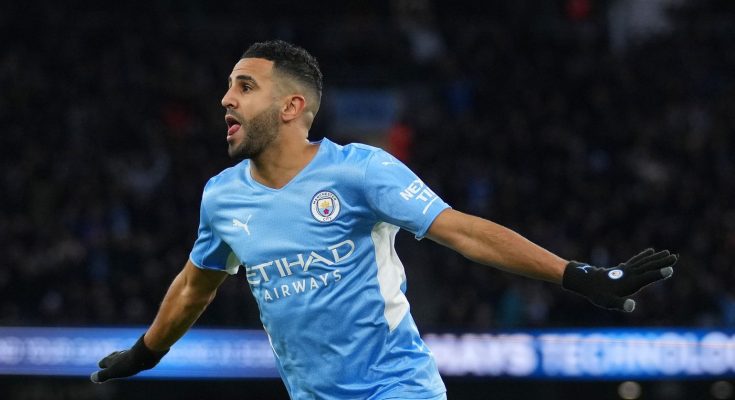 Riyad Mahrez is “hungry to achieve more” with Manchester City after signing a new contract with the Premier League champions.

The Algerian international has spent the last four seasons at City, following a £60million move from Leicester City, and his new contract runs until June 2025.

Mahrez scored 63 goals and assisted a further 43 in 189 appearances for City, winning seven major trophies during that successful spell.

He also famously won the Premier League with Leicester City in 2016, but the 31-year-old is eager to add more trophies to his collection alongside Pep Guardiola.

“I’m very happy to sign a new contract,” said Mahrez, who previously had just one season left on his contract.

“I have enjoyed every minute of my time here. It is a pleasure to be a part of such an incredible club.

“It’s helped us achieve the success we’ve enjoyed over the last four seasons, it’s been unforgettable and it’s pushed us all to achieve even more.

“I would also like to thank Pep, Txiki [Begiristain] and the coaching staff for the way they helped me develop as a player and for pushing me to keep improving.

“Now I just want to try to play my part and help us be successful next season and beyond.”

The 106 goals Mahrez has directly contributed to since his debut in August 2018 is surpassed only by Kevin De Bruyne (115) and Raheem Sterling (125) among City players.

Mahrez impressed again last season as City retained their Premier League title, with his tally of 24 goals in all competitions at least five more than any of his teammates.

He follows Rodri in signing a new contract with City in a busy transfer window that also saw the arrivals of Erling Haaland, Stefan Ortega and Kalvin Phillips, while Fernandinho, Gabriel Jesus and Sterling departed.

City FC director Begiristain said: “Riyad has played a major role in our success in the four years since he joined us and we are all delighted that he has agreed to this new deal.

“He has brought so much to the club with his skill, talent, commitment and desire to win, which has been evident since he first arrived. I also know that Pep and his coaching staff are enjoying working with Riyad.”

“He is one of the most exciting wingers in the game and we are all very excited for him to be part of our continued pursuit of greater success.”