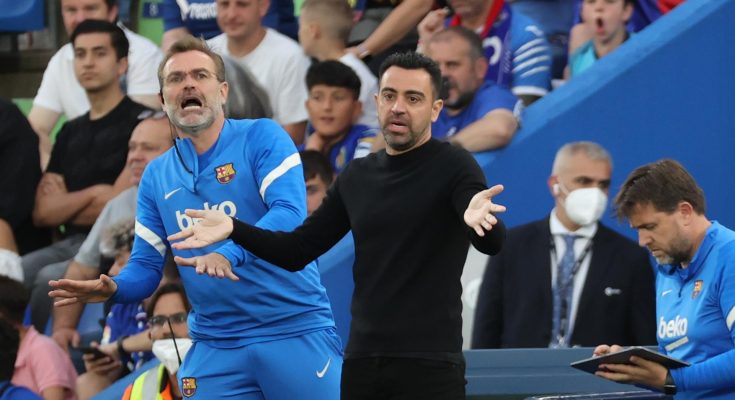 Caretaker Barcelona boss Oscar Hernandez conceded it will be the “first and last time” he runs a game from the touchlines, after his side’s 6-0 win over Inter Miami on Tuesday.

Barca played six different strikers in the opening game of their tour of the United States, with Gavi, Memphis Depay and Ousmane Dembele adding first-half goals from Pierre-Emerick Aubameyang, Raphinha and Ansu Fati.

With Xavi denied entry to the US reportedly following recent visits to Iran over the past five years with Qatari club Al-Sadd as a player and coach, his assistant was tasked with taking over on match day.

The 45-year-old, who was also an assistant at Al-Sadd, said after the match that he hoped his brother’s problems would be resolved quickly, with Barcelona still playing Real Madrid, Juventus and the New York Red Bulls.

Still, he was satisfied with Barca’s performance.

“Hopefully this will be my first and last game,” Hernandez said. “The situation is not easy for Xavi, but hopefully a solution will be found and he can be with us tomorrow.

“We are very happy because even though we are friendly, things were visible. Those at the front were very switched on and deployed the mechanisms we were working on. We have to create competitiveness and that’s how we will grow.”

Robert Lewandowski did not feature after confirming his move from Bayern Munich on Saturday, but the older Hernandez sibling believes he will be an influential addition going forward.

“With his arrival, we made a huge leap in quality because he is a top player in the world,” he said.

“The club made a big effort, but we needed a top player. Moreover, he is a footballer with a lot of commitment.

“It is a blessing for Xavi and the coaching staff to have so many strikers because the competitiveness will allow the team to grow.

Hernandez also spared special credit for Ansa Fati, who missed a significant amount of last season with a hamstring injury.

Along with making it 3-0, the 19-year-old was impressive on Tuesday, giving Barcelona the momentum they sorely lacked last campaign.

“It’s like a new signing and a very high-level signing,” the assistant said. “He is growing a lot, physically he is getting better and better and we are very happy because he is a reference.”