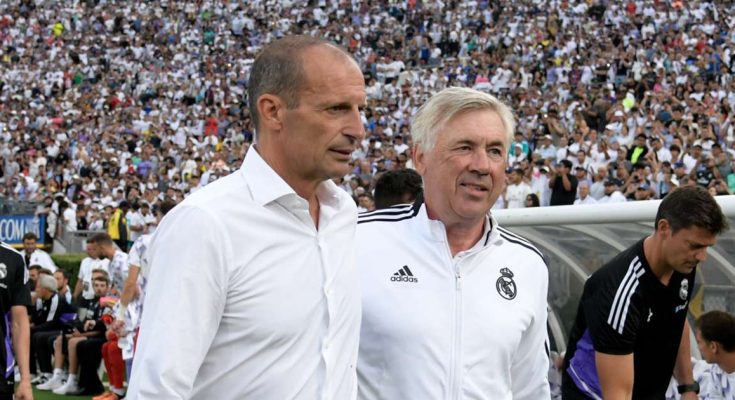 Juventus head coach Massimiliano Allegri hailed Real Madrid as “the strongest team in Europe” after the Spanish giants beat the Bianconeri 2-0 in a friendly in the United States.

A first-half penalty from Karim Benzema was followed by a second-half tap-in from Marco Asensio, which was enough to secure victory for LaLiga and Champions League holders Madrid at the Rose Bowl in California in front of a crowd of 93,702.

It was the last game for both teams on their US tour and Allegri was delighted despite the loss.

Allegri told Juventus’ official website: “A good game to cap off a good 10 days of work in the United States. We were up against the strongest team in Europe and as long as we could play, we played.” he tries to control possession and not give the ball away.

“I’m happy with the effort from the lads. We can still grow a lot though and there are players who still need to come back. There were chances at both ends tonight and we should have managed it with a bit more patience.”

“Now we have a few days of rest and then back to work because the season is coming up.”

Madrid head coach and former Juve boss Carlo Ancelotti was pleased with his own team’s performance and believes they are ready for the UEFA Super Cup clash with Europa League winners Eintracht Frankfurt on August 10 in Helsinki.

“[The tour] was very positive because we didn’t have any injuries, apart from a small sprain for [Dani] Carvajal,” Ancelotti told Madrid’s official website.

“The team worked really well and we had no problems. It was a well-managed pre-season and now we have the confidence to win the European Super Cup.”