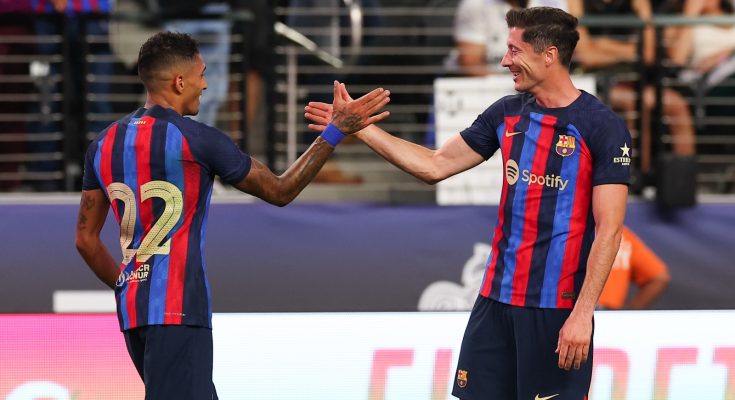 Robert Lewandowski feels like he has been at Barcelona “for months” after making his first appearance for the Blaugrana in Saturday’s El Clasico win against Real Madrid.

The exhibition match at the Allegiant Stadium in Las Vegas was decided by a wonderful goal from another new man, Raphinha, as Xavi’s side ran out 1-0 winners.

Lewandowski failed to find the back of the net on his debut, but saw a fierce effort on goal in the first half pushed away by Madrid goalkeeper Thibaut Courtois.

The Polish forward only officially became a Barca player last week, but after the match he explained to Barca TV and TV3 how he already feels settled.

“Although it was a friendly, a Clasico is a Clasico and it’s always different and special, and we’re very happy with the quality and intensity we showed,” said Lewandowski.

Despite their well-publicised financial problems, Barca have been very active in the transfer window, bringing in Lewandowski, Raphinha, Franck Kessie and Andreas Christensen so far, and have also been linked with a move for Jules Kounde from Sevilla.

The former Bayern Munich striker is expecting a successful first campaign in Spain and discussed the winning mentality at his new club.

“We always think about winning,” he added. “We have a very winning mentality, not only in matches but also in training.

“We have an opportunity to look forward and think it can be a great season.”

Barca opened their LaLiga campaign at home to Rayo Vallecano on 13 August.