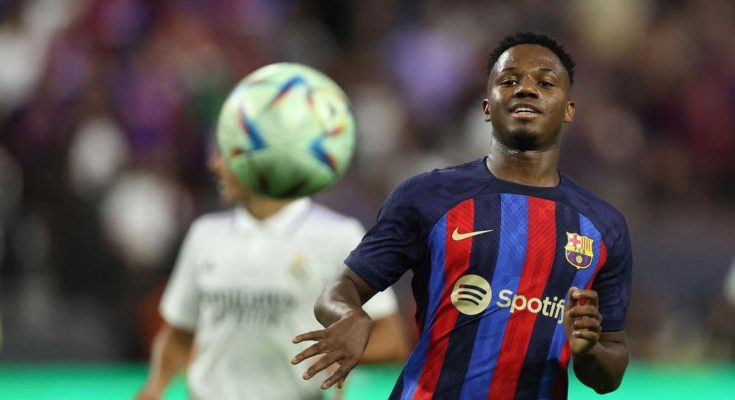 Ansu Fati is confident he can return to his previous heights after an injury-plagued couple of seasons for Barcelona.

Fati burst onto the scene as a 16-year-old in 2019, becoming the second-youngest player to play for Barca in LaLiga and the third-youngest to find the back of the net in Spain’s top flight.

He set records as the youngest goalscorer in the Champions League, Spain and El Clasico – although his international record has since been surpassed by Gavi.

Fati sat out almost a year with a serious knee injury he picked up in November 2020 and hamstring problems limited him to just 15 appearances in all competitions last season.

However, he is confident he will eventually be the player he was before his injury-plagued spell.

“I am working to achieve it and I have no doubt that with work and sacrifice I will achieve it,” Fati told TV3. “I’m not 100 percent right now, but I’m very close.

“It’s normal when you come back from injury to play very carefully. But it’s only the first minutes of the first game, then you forget about it. Right now I’m playing without fear.

“I know where I came from and what I’ve done for it. I’ve never thought about quitting. I’m very young and I have my whole future ahead of me.”

Fati will face increased competition for playing time following the arrivals of Robert Lewandowski and Raphinha at the Camp Nou, but he feels such competition can help return Barca to their former glory.

“We are building a very good team, very competitive. The new signings will give us a lot throughout the season. They are great players who will help us,” said Fati.

“We have a very strong forward line and a lot of competition. It’s very good for the team and the players that we can’t relax. We know that if we don’t work hard, we won’t play because someone. That’s good because it always keeps us on the edge.

“It’s a team that wants to win titles. We know that in recent years we’ve only won the Copa del Rey and that can’t be enough for Barca.”