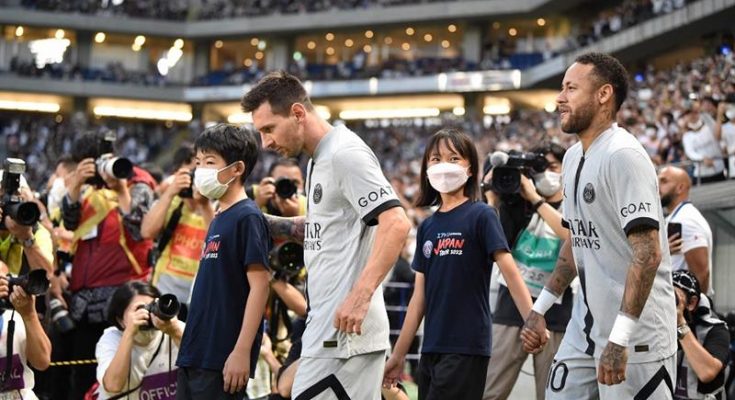 Paris Saint-Germain coach Christophe Galtier hinted further arrivals are imminent after his side wrapped up their pre-season tour of Japan by thrashing Gamba Osaka 6-2.

Meanwhile, despite star trio Kylian Mbappe, Lionel Messi, and Neymar finding the back of the net during Monday’s game, Galtier was frustrated with his side’s defending and insisted they must improve after conceding “two goals too many”.

With Messi starting alongside Neymar and Pablo Sarabia in a 3-4-3 formation, PSG eased into a 4-1 lead at half-time as each of the front three joined Nuno Mendes on the scoresheet.

Neymar grabbed his second after the break before Mbappe came on to convert a late penalty to ensure PSG ended their tour of Japan with three wins from three outings.

With PSG having already signed creative midfielder Vitinho, they are expected to make another recruitment drive ahead of their Ligue 1 campaign which starts on August 6.

It emerged on Monday that RB Leipzig’s Nordi Mukiele will miss the German side’s DFL-Supercup meeting with Bayern Munich while he completes a move to Paris, and Galtier hopes the defender will be followed by other new signings.

“The club is working to improve and strengthen this squad,” he said at the post-match press conference.

“We’ll fly in, make the long 12-hour journey, go to sleep, and when we land, we might have one or two, maybe three more players… We’ll see what happens. week.”

PSG put in a scintillating attacking performance in their final pre-season outing, just slightly over their 5.65 Expected Goals (xG) and 17 attempts on target, but Galtier was unimpressed by their two concessions.

Galtier has built a reputation for his strong defensive organization and stressed that PSG must improve off the ball.

“I’m satisfied with the first half, we were tired in the second. We scored two goals, two goals too many,” added Galtier. “Even if we have a big goal difference, I would like it if we are difficult to beat. It is the main task.

“Upset? That’s not the term. We have to be more structured and not disorganized for the second goal. We weren’t in the right timing, we couldn’t get back on track. That’s an important line of work.” , we have to show a tougher face for future matches.

“[But] while we don’t want to concede too many chances and concede goals, the DNA of my players is to play, take risks and attack as much as possible. We won’t change that.”