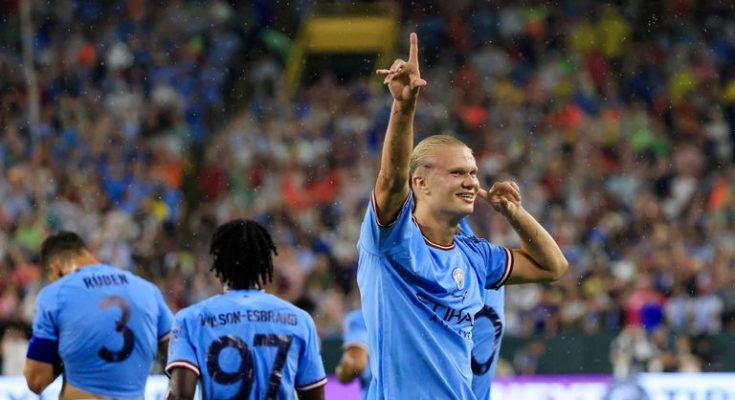 The 22-year-old has played just 40 minutes of pre-season action since joining City from Borussia Dortmund at the start of this transfer window.

Guardiola has been closely monitoring Haaland’s fitness for the prolific striker, who has had a few niggles but is ready to use him against Liverpool this weekend.

“He’s ready to play on Saturday and the first impression as a guy is really good, a funny guy. He’s settled really well with the team. That’s important,” Guardiola said.

“People probably think it’s not one of the most important things, but it is… a good mood in the dressing room is more important than any advice or any other thing you can say.

“We try to cope with the family, we try to get to know each other in training, we see what we want to do, what we did in previous seasons. Quality will take care of the rest.”

Haaland has scored 86 goals in 89 games for Dortmund in all competitions – only Robert Lewandowski (122) and Kylian Mbappe (89) have scored more times among players from Europe’s top five leagues in that period.

The Norway international needed just 12 minutes to find the back of the net on his City debut with the winner against Bayern Munich last week and Guardiola is happy with the former Salzburg forward’s form.

“He feels good. When I spoke to him in the last few days, he feels a bit [not angry], but he can train and move. He will be better at the end of August than now,” Guardiola said.

“Now we have one game a week with more training. Then we start a crazy schedule – three days, four days.

“I think for Liverpool and ourselves I think we arrive a bit early in this competition, but the opportunity to play the Community Shield is always too early. We have to adapt.”