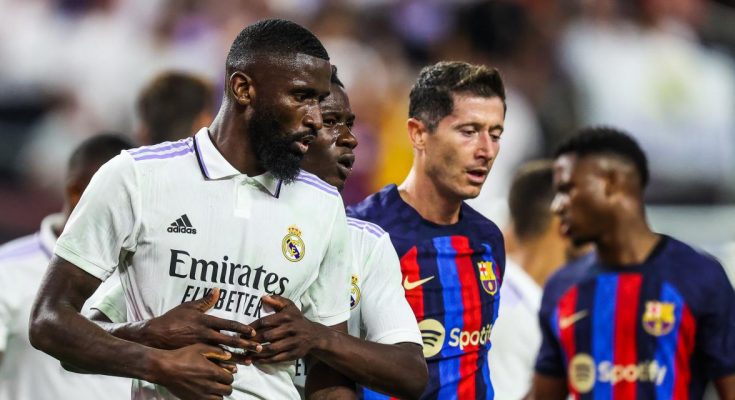 Real Madrid boss Carlo Ancelotti has outlined his plans for new signing Antonio Rudiger, and hinted that he could be utilised in an unfamiliar position.

The Germany international joined the reigning Champions League winners on a free transfer after the expiry of his contract with Chelsea, where he was a regular for the Blues in the heart of defence.

Various opportunities may appear in Ancelotti’s plans, however, as the head coach has admitted, he does not want to disrupt the centre-back partnership of Eder Militao and David Alaba.

Rudiger started at left-back during Madrid’s 1-0 pre-season defeat to Barcelona and Ancelotti has hinted that this is an area he could move into more regularly.

“I liked him a lot. I’m not crazy and he’s very intelligent,” the Italian said after the loss.

“He can play in that position as well as he can change against Alaba. They didn’t do that today because it went well.”

“[Alaba] as a left-back only when necessary. I don’t want to change the pair from last year.”

Real have a void on the left side of defense following the departure of club legend Marcelo last season.

While another signing is unlikely before the end of this term, Ancelotti has made it clear that he has no intention of making any further additions to his squad.