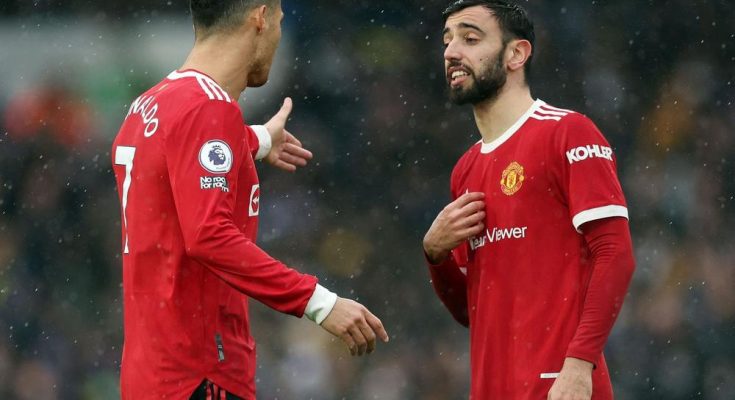 Bruno Fernandes has moved to clarify his stance on playing alongside Cristiano Ronaldo after he was accused of aiming a thinly-veiled dig at the Manchester United forward.

Following Manchester United’s 3-1 win over Crystal Palace, which Ronaldo missed due to his continued absence for personal reasons, Fernandes hailed the front three of Jadon Sancho, Marcus Rashford and Anthony Martial for good pressure and more freedom in midfield – comments which have been interpreted as criticism of Ronaldo’s inactivity in attack.

However, he stressed in an interview with Sky Sports that he has no problems playing alongside Ronaldo.

“As I’ve always said, I’m there to serve my attackers,” he said.

“I think we had an amazing start to the season when Cristiano came in. After that I scored a lot of goals with Cristiano. I think all my goals came next to Cristiano. It wasn’t a problem at all.”

“I play with him for the international team, we qualified for the Euros with the assist he gave me, so [Ronaldo] will never be a problem. Such good players can fit together at any time.

“I’m here to make my forwards happy, to enjoy the game. That’s the job of the midfield and if they score goals and get their numbers, I’ll be happy for them because the team will have better results.”

Fernandes’ comments were echoed by Raphael Varane, who insisted no one at United believed they would be better off without Ronaldo.

“Cristiano is a great competitor, he is a legend,” said the centre-back. “Obviously he’s very good to play with and he always helps the team.

“He is a great player and we all want the best players in the team. We will try to improve next season.

“We value him as a player and as a person. I think that debate was outside the dressing room. We know his qualities. And we know he’s very famous, so we know a lot of people will talk about the team’s performance.” and his performance.”