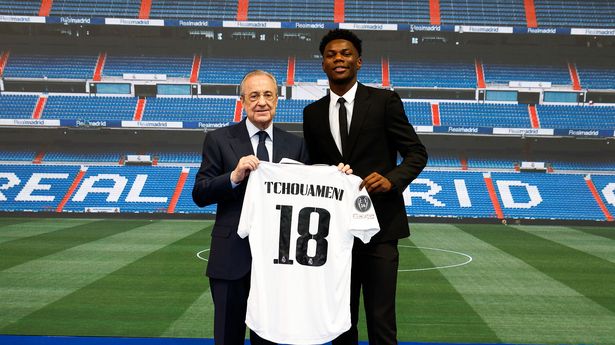 Aurelien Tchouameni has discussed his decision to turn down Paris Saint-Germain and join Real Madrid, who presented their new signing on Tuesday.

The Frenchman admitted to being contacted by Kylian Mbappe, who tried to persuade his Les Bleus teammate to join PSG, but Tchouameni had already made the decision.

“As soon as the Real Madrid application was received, I told my agent to close the contract,” Tchouameni told a news conference.

“There have been other talks, but the first option was Real Madrid.

“In the Champions League final there were already talks with Real Madrid and it is true that when I saw the games with PSG or [Manchester] City I wrote to my agent saying ‘Do your best to take me there, please’.

“Kylian Mbappe decided to stay at PSG and he already knew I was leaving Monaco and he wanted to know if I could go to PSG, but I told him I wanted to [sign] Real Madrid and he understood very well.”

Who else did Tchouameni speak to before signing for Real Madrid?

Tchouameni went on to say that he had also spoken to my teammates Karim Benzema and Eduardo Camavinga before putting a pen in the paper on the Real Madrid deal.

“I was fortunate to speak to Benzema and Camavinga,” he added.

“In Camavinga’s case we have seen how he has improved in his first year and I will be lucky to play for a team with the best striker in the world.

“During the discussion, she wrote to me and asked if she could help me.

“Carlo Ancelotti spoke to me during the negotiations and told me I had to come to Real Madrid to continue my studies.”

The Frenchman has also emphasized that he can play as a substitute midfielder and boxer in Ancelotti 4-3-3.

“I can play in both positions. I have no problem playing back or forward [in the middle of third place].”