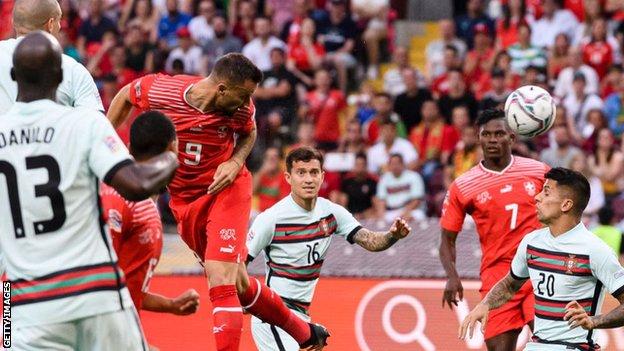 Portugal suffered their first defeat of the UEFA Nations League campaign after Haris Seferovic scored the winner in a 1-0 victory for Switzerland in Geneva.

Switzerland had lost all three Group A2 games, including a 4-0 defeat in a back-to-back match, but took the lead through Ferovic in the first minute.

Fernando Santos ‘side have been repeatedly denied by Swiss goalkeeper Jonas Omlin for an equalizer, with the absence of a notable Cristiano Ronaldo in the visitors’ stand.

The defeat left Portugal by a point behind Spain at the top of the group, and Switzerland secured its first victory by knocking out the Czech Republic in third place.

Athletes thought they had been fined 13 minutes later for Nuno Mendes’ handball, but a long-running VAR check ruled that Nico Elvedi had fouled Andre Silva.

Omlin kept his team ahead by denying Danilo Pereira a close goal, before Rafael Leao returned home shortly, he was sent off.

Omlin also suspended Andre Silva’s low-key drive after a while, while Remo Freuler pulled wide on the other side.

The Montpellier stopper continued its good work by pushing the effort of the slippery Goncalo Guedes and the low head of Diogo Jota as Switzerland clung to victory.