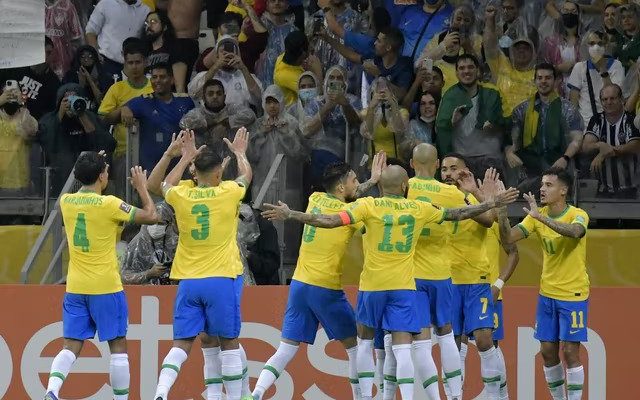 Brazil had little difficulty securing a 5-1 defeat of South Korea, with Richarlison, Neymar, and Philippe Coutinho netting for Tite’s side. Neymar scored two penalties as Brazil beat South Korea 5-1 in a friendly match in Seoul on Thursday.

South Korean star Son Heung-min has urged his team-mates not to be intimidated by the top-ranked international team, but the Tite boys have been dropped from the list of top players in the game.

Richarlison’s first goal was Brazil’s lead in the seventh minute and, although the athletes rated Hwang Ui-jo, Brazil’s many goals were inevitable as their reign.

Alex Sandro showed the key to bringing Brazil back as he won two penalties on both sides of the break, and Neymar passed the goalkeeper both times to put the game out of South Korea before substitutes Philippe Coutinho and Gabriel Jesus finished the tournament.

Brazil’s meaningful start saw Thiago Silva denied an offside goal within two minutes, though they did not wait long to officially lead as Richarlison deflected Fred’s goal into the net.

After wasting a lot of chances in something of an attack, the Selecao were shown back just half an hour later – Hwang grabbed Silva, turned the box and shot in the lower left corner.

However, Brazil returned to the top during the break. A VAR review saw Lee Yong grab Alex Sandro in the box and Neymar turned cool.

The same incident happened 10 minutes into the second half, Kim Young-Gwon was guilty, and Neymar made sure the result was the same.

Coutinho found the top right corner just after pulling out Neymar to boost Brazil’s fine goal, before Jesus drove home at the end of the race to complete Selecao’s impressive day’s work.