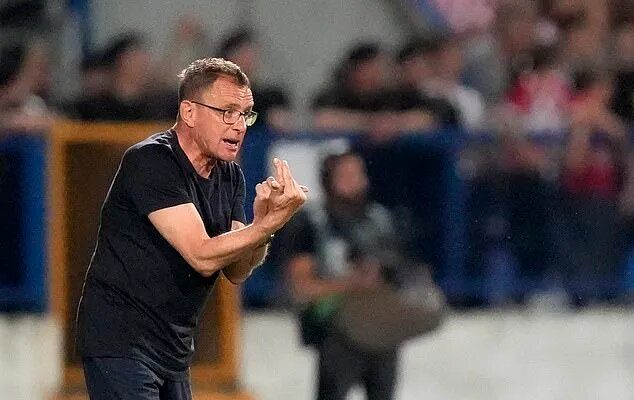 Former Manchester United boss Ralf Rangnick got off to a good start with the Austrian national team, beating Croatia 3-0 in the opening Nations League match.

It was Croatia who enjoyed a lot of food early, controlling 60 percent in the first half, but it would have been the Austrians going into the break as the team was overjoyed after Marko Arnautovic hit his strike in the bottom corner for 41 minutes.

After beating the Croatians 10-4 in the first half – the only Austrian shortstop to score – in the second half was a very different story.

Of the seven shots he scored in the second 45 games, all seven were Austrians, and they were rewarded with two quick goals as Michael Gregoritsch made it 2-0 in the 54th minute before Marcel Sabitzer scored from a long-range goal. winning in amazing style after three minutes.

By winning, Rangnick became the first manager to guide Austria to victory and a clean sheet in its first match since Hans Krankl in 2002.

Speaking after the game, Rangnick said he was pleased with his team’s early win to excel.

“We had problems in the first 25 minutes, but getting a goal before the break was a good thing,” he said.

“In the second half we played very well and scored two good goals – we could have scored more.

“I am very satisfied.”

Striker Arnautovic added: “The players were full of energy. Croatia is a very good team, but we played a very good game.

“We changed our chances in goal and deserved this win. We want to get back to the top.”

Austria continues its United Nations campaign against Denmark on Monday.