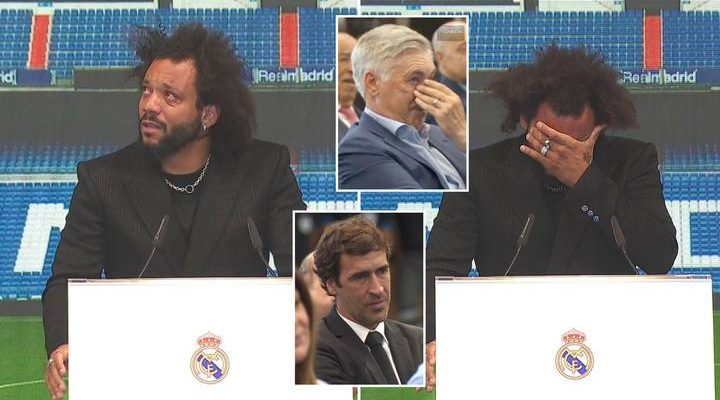 An emotional Marcelo declared Real Madrid have “a promising future” as the Los Blancos legend issued his farewell at the Santiago Bernabeu on Monday.

Marcelo has been with Los Blancos since 2007, having played nearly 550 games in LaLiga, but confirmed he would leave after beating Liverpool in the Champions League final last month.

This was the fifth Champions League trophy added to the left-back win, as he took part as Madrid lifted their 35th LaLiga title with four games to go.

The success of Spain’s top flight made him the most decorated player in Madrid’s history after lifting 24 trophies with the club, before adding another European victory to extend his record.

Marcelo has only appeared 18 times in all competitions in the 2021-22 campaign, but the 34-year-old is delighted to leave a legacy of “the best club in the world”.

“When I left Brazil I intended to play in Europe, to play in the Champions League and now when I leave Real Madrid, I leave as the most capped player in the history of the best team in the world and a historic thing,” he said at a farewell press conference.

“There are no words to describe gratitude, the work of all those behind you, all of them. I have tried all these years, treating everyone equally.

“It will not be a problem to come back I do not see that I am leaving but there will be no problem.

“I’m fine right now. I never thought about that. Here they gave me a chance to play it all and win it on a magical night at the Bernabeu.

“I can be thankful that all these years I have been healthy, smiling, not too injured, I have good games, I have scored goals.

“I don’t think much about the future. It’s hard to leave the club of your life after 15 years. There’s a lot of joy, suffering, pain …

“I have given my all for the team. I would have done the same thing again. Wearing this shirt is a wonderful thing. The future does not scare me – that is what I should have done. History has been written. I am very happy with myself.”

As for his next move, Marcelo is not yet worried about going to coaching and has not been able to give an update on his playing career during the move to Turkey.

“If I have something, if I have anything, I will tell you,” he added. “I don’t have the strength to coach – I have other areas that I think I am better at.

Marcelo signed on to reassure Los Blancos fans that the club is in safe hands, adding: “Real Madrid has a very promising future”.