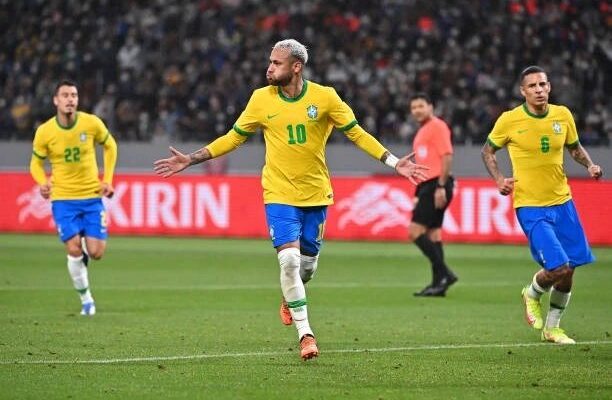 Brazil earned a 1-0 friendly win against Japan in Tokyo on Monday thanks to a penalty from Neymar.

Tite’s side dominated for large periods in the pouring rain at the New Japan National Stadium and squandered several chances before Neymar’s spot-kick finally broke the deadlock in the 77th minute.

The victory means the Selecao have won five games in a row, and have not lost since July when they were defeated by Argentina in the Copa America final

Both teams emerged after a major victory last year, with Japan beating Paraguay 4-1 on Thursday, while Brazil went better by beating South Korea 5-1 on the same day.

Brazil almost led within two minutes with a fine match between Vinicius Junior and Neymar in the footsteps of Lucas Paqueta, who hit the post after shooting Shuichi Gonda on a Japanese post.

Japan had a short run in the first half where they created problems for Tite’s team, with Takumi Minamino finding joy in the middle of the line, but Brazil quickly established their dominance as they created more chances.

Casemiro should have put the visitors ahead in the 26th minute but could only point a header from Raphinha off the post, before Neymar’s goal was split by Gonda and Raphinha curled a free-kick straight away from the left-hand post.

Gabriel Martinelli and Gabriel Jesus were introduced just an hour later and the Arsenal striker almost had an immediate impact, but he managed to direct his shot into the distance after the ball was put down by Casemiro.

The only real opportunity for the athletes to notice came in the 72nd minute when Junya Ito fired a shot from a distance.

Brazil received a penalty soon after another substitute, Richarlison, was fouled by Wataru Endo and Neymar misjudged Gonda from the area to win.