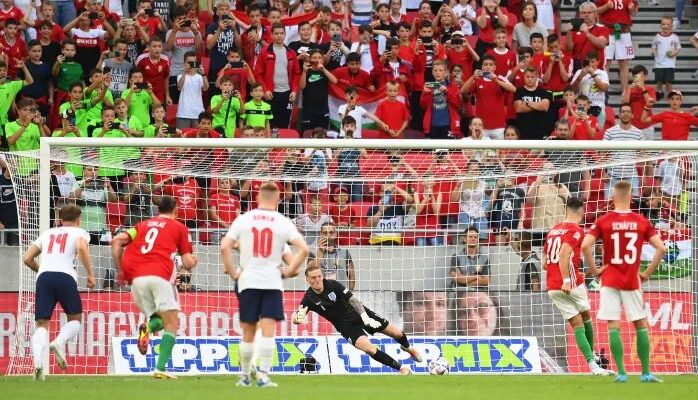 England’s 2022/23 UEFA Nations League campaign got off to a nightmare start as Hungary handed the Three Lions with their first defeat in 90 minutes since November 2020 on Saturday.

The event was marred by an uproar as players and England officials took a knee-jerk reaction before the start of the match. After that, the Three Lions did not go with Dominik Szoboszlai scoring a goal in the second half which Hungary won 1-0.

The match started at an astonishing speed in sunny Budapest, with Jarrod Bowen with the first two chances and Harry Kane also bent the ball off the post.

Hungary quickly stepped up to the plate, however, and Conor Coady was forced to clear Szoboszlai’s shot off the line in the 11th minute.

After this happy start things went well. Zsolt Nagy threatened to provoke talks within half an hour but his attempt to bend from the edge of the box was struck by Jordan Pickford.

A few minutes later Pickford almost disappointed Adam Szalai. Thanks to Everton’s stopper, however, Szalai came out of the line and slightly past the post.

James Justin who played his first game was ruled out with an injury during the break and his replacement, Buka Saka almost had an immediate impact. Exploding on the left side, the Arsenal man went all the way in before seeing his gun saved by Peter Gulacsi.

Just an hour later, Hungary took the lead. Reece James badly controlled a long ball and collided with Nagy, meeting referee Artur Dias saw fit for a yellow card and a penalty. Szoboszlai lifted the ball home and made no mistake, throwing the ball in the lower-left corner.

England almost responded quickly after a 1-0 win over Harry Maguire and saw Bowen run in the back, but the striker could not point out the wrong volley heading for Gulcasi.

In the 14 minutes from the time Coady has got even closer, watching the widest free kick on the far post. Hungary then disregarded the chance to put the result in no doubt as Pickford flew across the crossbar to prevent Laszlo Kleinheisler from completing a counter-attack.

Before full-time Kane was given two-and-a-half chances, which the England captain could not do as Gareth Southgate’s side lost a humiliating defeat. It was the Three Lions’ first defeat against Hungary in 60 years.