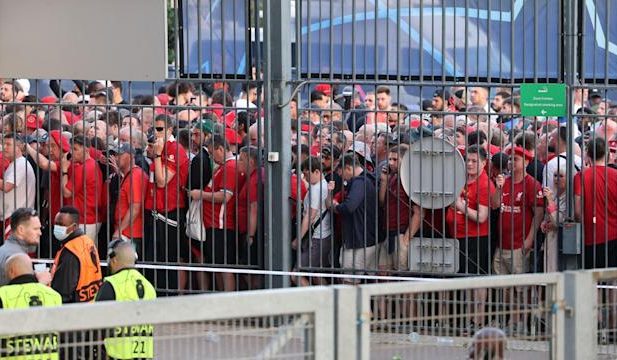 UEFA has blamed delays in the UEFA Champions League final for fans trying to use “fake tickets” after Liverpool called for a formal investigation into the disruption.

The governing body of European football announced the first 15 minutes delay ahead of Saturday’s show at the Stade de France, in which Real Madrid won 1-0, citing “safety reasons” for delays for fans entering the stadium.

Both sides had finished warming themselves by the time the game started to be delayed and had returned to the dressing rooms in Paris.

Both teams returned for the second time at 21:05 home time before the match started at 21:36 – 36 minutes after the scheduled time – after the second delay.

The British broadcaster, BT Sport, reported that Liverpool fans had complained to the police outside the stadium, suggesting that tear gas be fired at fans.

Liverpool have issued a statement on the matter, calling for an investigation into the incidents.

“We are deeply saddened by the entry challenges and the deteriorating security situation Liverpool fans faced tonight at the Stade de France,” the statement read.

“This is the biggest game in European football and fans should not experience the events we saw tonight.

“We have formally called for an investigation into the cause of these unacceptable problems.”

UEFA later blamed the use of counterfeit tickets on the delays of supporters, promising to review the situation with local authorities.

“Before the game, a turn-off at Liverpool’s end was blocked by thousands of fans who had bought fake tickets from the rooms,” a UEFA statement read.

“This created an influx of fans who were trying to get in. As a result, the game was delayed by 35 minutes so that more fans with tickets could enter with real tickets.

“As the numbers outside the stadium continued to grow after the game, the police dispersed them with tear gas and forced them out of the stadium.

“UEFA sympathizes with those affected by the incidents and will review the matter immediately, as well as the French police and authorities and the French Football Federation.”