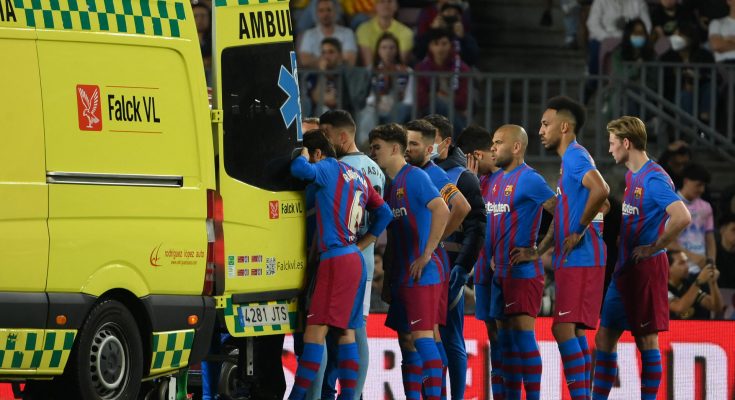 Barcelona coach Xavi has confirmed that Ronald Araujo “knows and is safe” but will be hospitalized after leaving the win against Celta Vigo by ambulance.

Araujo collided head-on with teammate Gavi just an hour later on Tuesday in a LaLiga match while competing for air football in his midfield.

Gavi sat down, and Araujo first appeared to chase the ball, only to fall to the ground.

Both teams urged medical staff to enter the stadium, and the 23-year-old received about 10 minutes of treatment before being taken to a nearby hospital.

The incident once marked Barca’s 3-1 victory, but Xavi gave a positive review of Araujo’s condition soon after he fully recovered.

“We were scared at first,” Xavi told Movistar +. “Doctors have told us he is alive and well. But he will stay overnight in the hospital.

“Tomorrow, I hope he’ll be back home. He’s just scared.”

Celta have recovered from three goals down to draw 3-3 in a rematch in November, but pulled one out of Iago Aspas at Camp Nou.

However, the red card given to Barca on-loan Jeison Murillo ultimately ended the visitors’ hopes of redeeming another unexpected point.

With his goal, Aspas has now scored 10 times in 15 league games against Barcelona – with only Diego Forlan scoring the most points against them in this century in LaLiga.

Aspas was asked about his goal in his post-match interview, but his immediate focus was on Araujo’s well-being.

“First of all, I want to send a message of encouragement to Ronald. I don’t know what happened,” he said. “He left on a stretcher but they told us he was better now.

“I started when I saw the incident and he looked shocked, then I saw him with his head down and that’s why we called the paramedics.

“In the game, we had more chances than Barcelona, ​​but we didn’t win in the rivalry area or ours.”