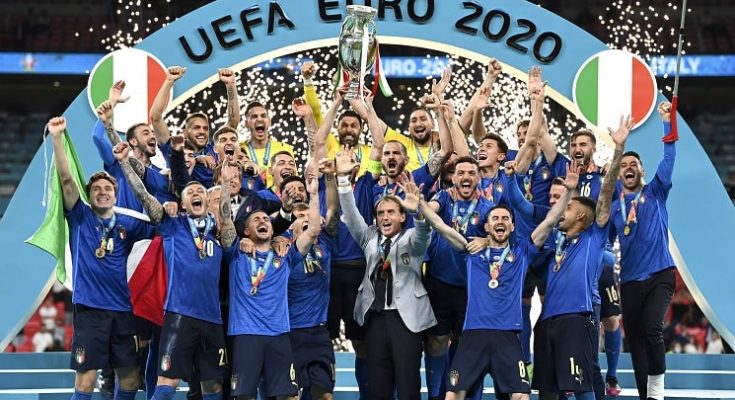 Leonardo Spinazzola will return to the Italian squad after Roberto Mancini named him among 39 players to face European champions Finalissima and Argentina and the Nations League.

Roman full-back Spinazzola was one of Italy’s leading stars in the glory of Euro 2020 but broke the Achilles tendon when his side won 2-1 in the quarter-finals against Belgium.

The injury has left the 29-year-old out for the rest of the season, he returned to Roma work earlier this month and will join the team after the Conference League final on Wednesday.

He is in the squad with Giorgio Chiellini who will play his last game for the national team when they face Copa America winners Argentina at Wembley on June 1.

Chiellini, 37, announced in April that he would stop playing international football this summer after Italy failed to qualify for the World Cup after being knocked out of the play-offs by North Macedonia.

Three days after captain Chiellini bid farewell to Italy it will begin its Nations League campaign by visiting Germany in Bologna, before hosting Hungary in Cesena on June 7.

Italy will face England who lost in the Euro final at Wolverhampton on June 11 and then travel to Moenchengladbach to play Germany three days later.

He selected all the players from the Euro-winning team except the injured Federico Chiesa, Gaetano Castrovilli, Rafael Toloi, and Ciro Immobile.

Italy squad for the ‘Finalissima’ and Nations League matches: