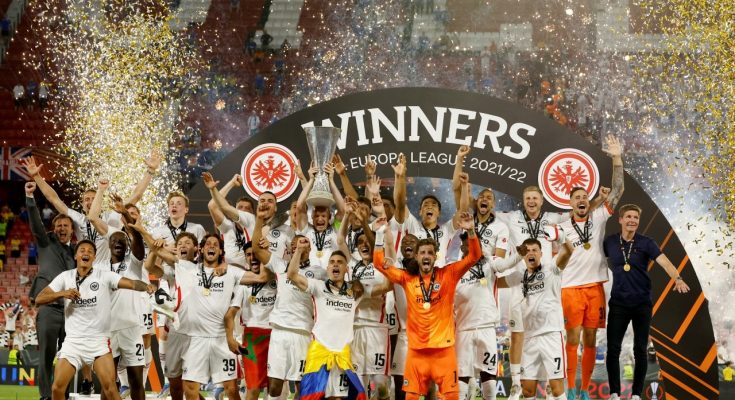 Oliver Glasner’s side were playing in the European finals for the first time since defeating Borussia Monchengladbach in the same tournament in 1980 and they were lagging behind in the 57th minute when Joe Aribo made full use of the defensive slapstick.

The Bundesliga uniforms forced extra time at Ramon Sanchez-Pizjuan 12 minutes later, however, with respect to finishing the distance near Rafael Borre.

Borre has been a hero and a penalty kick, a Colombian player who hit a late goal after Aaron Ramsey saw his penalty blocked by Kevin Trapp, who had denied Ryan Kent late in overtime.

Allan McGregor disallowed Daichi Kamada in a solid moment within the first 15 minutes, before the Rangers goalkeeper secured Ansgar Knauff’s effort 15 yards from his left post.

Aribo hit a straight line from 25 yards just after a point in the middle of the first half, while Filip Kostic struggled after running almost the entire stadium.

The Rangers looked like a very threatening team as the first half went on, with Trapp hitting the head with a John Lundstram header and Ryan Jack jumping into the promising position before the break.

Jesper Lindstrom came on shortly after the break, before Aribo put the Scottish team ahead with a cool finish over Trapp after grabbing the head of the returning Djibril Sow, a Nigerian international who benefited from Tuta’s smooth running.

Eintracht regained the equalizer in the 69th minute, when Borre stole in front of Calvin Bassey to kick Kostic’s fine ball from the left.

Trapp saved points for Kent with two minutes left in extra time to ensure the game went to penalties.

After a series of fine attempts, Ramsey, who was released just three minutes before, saw his foul ball blocked by Trapp, setting the stage for Borre to return home from 12 yards and send Eintracht fans to the rapture.