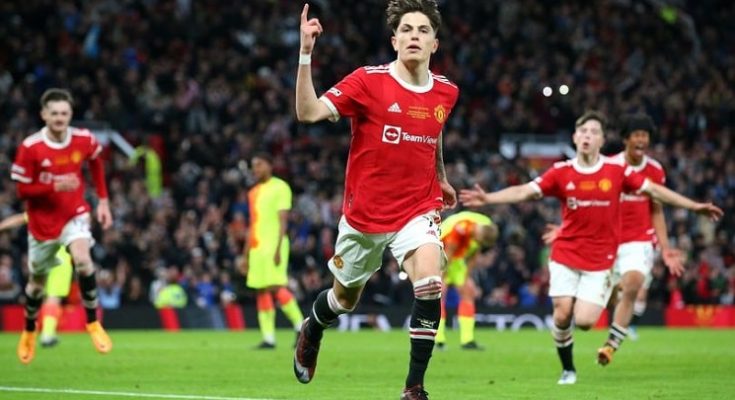 About 67,492 fans attended the FA Youth Cup final between the under-18 teams at Manchester United and Nottingham Forest at Old Trafford on Wednesday night.

The Red Devils won 3-1 at home to lift the trophy, with Alejandro Garnacho netting two goals to lead him to his 11th FA Youth Cup title.

Born in Madrid, Garnacho, who scored five goals in all competitions, has been named Manchester United’s youngest player of the year. The award was previously presented to a team experts, such as Paul Scholes, Ryan Giggs, Phil Neville, and Marcus Rashford, among others.

Sir Alex Ferguson and Manchester United captain Harry Maguire also attended the historic match, which attracted the most fans in the history of the tournament.

From Atletico Madrid to Manchester United

Garnacho, who was recently named by Argentina, has decided to leave Atletico Madrid in 2020 to join Manchester United, between Borussia Dortmund and Real Madrid.

On April 28, the 17-year-old made his debut for the first team, playing just a few minutes against Chelsea in the Premier League.

Why does Garnacho play for Argentina instead of Spain?

Garnacho was born in Madrid on July 1, 2004, but is the son of an Argentine mother. With dual nationality, the Manchester United prodigy had the option of choosing either the Spanish national team or Argentina.

He was in the international arena with young Spanish factions until Lionel Scaloni was called to represent Argentina. Garnacho celebrated his FA Youth Cup victory with the Argentine flag.