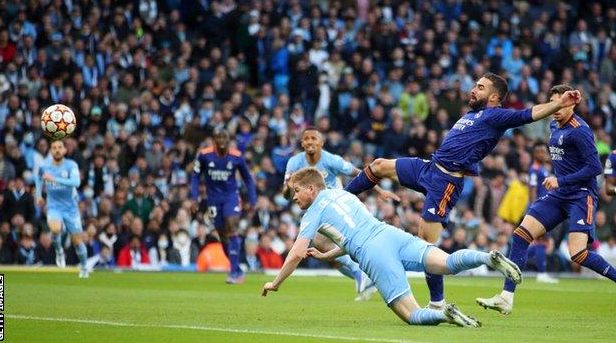 Manchester City had a chance to play in the UEFA Champions League semi-finals after beating Real Madrid 4-3 in the first leg at the Etihad Stadium.

Pep Guardiola’s side got off to a great start, scoring twice in the first 11 minutes with Kevin De Bruyne and Gabriel Jesus.

The athletes came back with a strike from Bernardo Silva, but Benzema’s penalty had already cut the gap into one goal before the second leg at the Santiago Bernabeu next Wednesday.

City started well and took the lead with a quick goal scored in the semi-finals of the Champions League.

Indeed, it was 94 seconds left when De Bruyne – the champion against Atletico Madrid in the quarter-finals – kicked Riyad Mahrez a fine ball.

De Bruyne turned to the provider as the donors doubled their profits nine minutes later; His cross kindly pierces Jesus’ head to remove it.

Mahrez and Phil Foden missed chances to extend the bar before Madrid pulled one back as Benzema threw home from Ferland Mendy’s center.

City regained their two-goal lead within eight minutes of the start, with Foden hitting Fernandinho’s header.

Madrid responded quickly as Vinicius ran down the left from inside his half, before passing Ederson.

But Los Blancos had the last word in honor of Benzema’s Panenka fine after Aymeric Laporte caught it in the box.