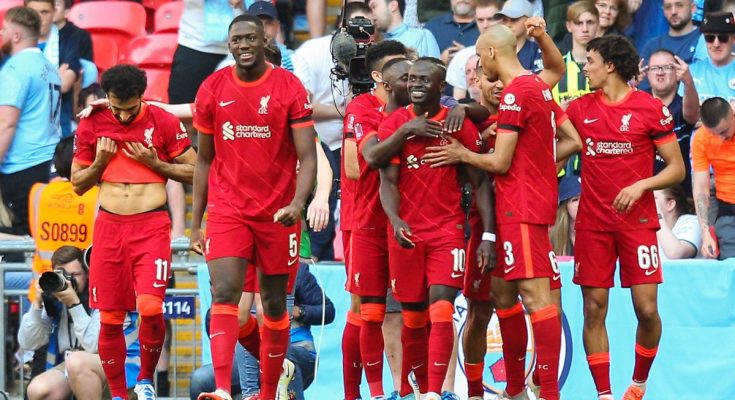 Liverpool’s quadruple hopes remain intact as they beat rivals Manchester City 3-2 to secure their spot in the FA Cup final.

The Reds and City are neck-and-neck in the Premier League and could yet contest the Champions League final, but Saturday’s win at Wembley made it advantage of Liverpool in their 2021-22 trophies duel.

While City were without Kyle Walker and only had Kevin De Bruyne on the bench due to injury, Liverpool restored several key players to their line-up after a midweek rest and it was evident throughout a first half that the Reds dominated.

Liverpool were 3-0 up by half-time thanks to Ibrahima Konate’s early header and a Sadio Mane double, with City goalkeeper Zack Steffen at fault for the Senegal forward’s first goal.

Jack Grealish pulled one back early in the second period and Bernardo Silva’s late tap-in forced a tense finish, but Liverpool held on.

Jurgen Klopp’s men were ahead inside nine minutes, Konate towering above everyone to head home to Andrew Robertson’s corner.

It was 2-0 soon after. Where Ederson escaped a goal-line blunder in their Premier League showdown last weekend, Steffen was punished by Mane as the attacker’s tackle saw the ball ricochet into the net.

City seemingly found themselves all but beaten on the stroke of half-time, Mane lashing home on the volley after a sublime Thiago Alcantara pass.

Grealish picked out the top-left corner with a lovely finish of his own just after the restart, and Silva nudged in from close range in second-half stoppage time to set Liverpool nerves jangling.

But it was too little, too late for City as two fantastic defensive blocks helped Liverpool hold firm to reach the first FA Cup final in 10 years.