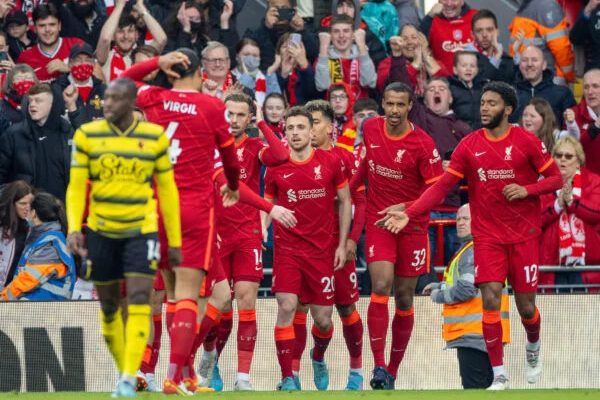 Liverpool climbed to the top of the Premier League, perhaps for a while, after a comfortable 2-0 win over Watford in Saturday’s first game.

The Reds were not very good at Anfield, with Watford over the game in all of them, but they broke the lead after 22 minutes with an unstoppable Diogo Jota.

The Portuguese striker passed to Ben Foster after a sweet ball in the box from Joe Gomez, who used a sloppy defense against Kiko Femenia at the time.

Watford could have easily moved ahead of Liverpool’s goal, as Roy Hodgson’s side had a number of fine attempts in the first 20 minutes.

Ismaila Sarr climbed over the post from a distance before Alisson made a brilliant save on the Liverpool goal following a header close to Cucho Hernandez’s post.

Juraj Kucka should have given Watford the lead after he was sent one-on-one with Alisson shortly afterward, but a Brazilian save allowed Liverpool to go straight to the other side and open up points; The cross of Gomez reminds us of what Trent Alexander-Arnold used to bring from the right side.

Watford had another good chance at the start of the second half, but Joao Pedro shot Alisson’s remote post after Sarr’s fine performance – his reaction to missing out on targeted evidence that he should have done better.

Liverpool needed to be deep, and their players were obviously tired of their international performances but were given a second goal after Kucka received an absurd penalty just minutes before.

Fabinho stepped up and put the ball in Foster’s top corner, starting in 12th place after Mohamed Salah was sent off with 20 minutes left.

The result puts Liverpool two points ahead of Manchester City, who could not secure a top spot with a win over Burnley.