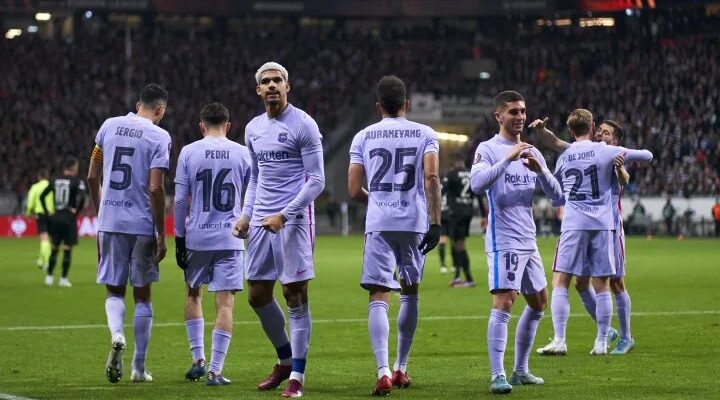 Ferran Torres rescued a 1-1 draw for Barcelona in the first leg of their Europa League quarter-final against Eintracht Frankfurt, who finished with 10 men.

After the first goalless draw at Deutsche Bank Park on Thursday, Ansgar Knauff sent home fans excited about the spectacular finish in the 20 yards.

Xavi sent Frankie de Jong and Ousmane Dembele in response and the two started a fine move that ended with Torres inserting an equalizer in the lower-left corner.

And although Tuta was given a second yellow card with more than 10 minutes left, Barca were unable to complete the change too late to snatch the victory.

Kevin Trapp’s last-minute interception blocked Torres in the third minute and Djibril Sow failed to score the opener on the other side.

Barca had the ball but Trapp denied Pierre-Emerick Aubameyang and they lost Gerard Pique due to obvious groin injuries – Clement Lenglet took him in the 23rd minute.

Eintracht were awarded a penalty just before the break but when reviewing the video, referee Srdjan Jovanovic found Sergio Busquets to have won the ball in his Rafael Borre challenge.

Athletes advanced just three minutes into the rest, however, when Knauff bent a great hit in the upper right corner at the edge of the next box.

Jesper Lindstrom missed a good chance to double Eintracht’s lead after 90 seconds and it looked even worse when De Jong – who had only four minutes left on the pitch – included Torres to complete a smooth move.

Tuta was handed a yellow card for a tossed to Pedri in the 78th minute but Barça failed to make it into the closing stages.