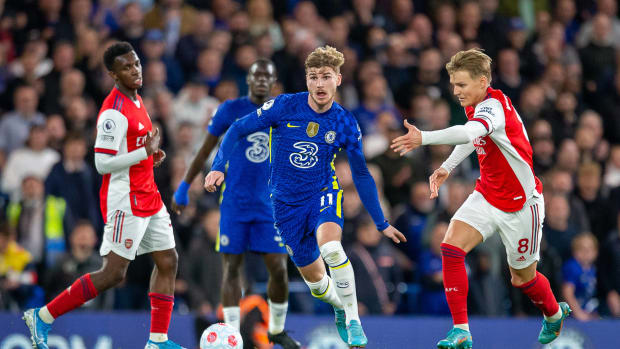 Arsenal once again chased their top four with a thrilling 4-2 victory over Chelsea at Stamford Bridge on Wednesday night.

There were empty seats at Stamford Bridge, in Chelsea’s first home game where there were only seasonal ticket holders as government sanctions meant the club could not sell tickets for the general game.

There was chaos in the first half, with four goals flying through a number of defensive errors on both ends.

Chelsea almost took the lead within five minutes, but Marcos Alonso’s close effort was diverted from the sidelines. Gabriel Magalhaes was then forced to remove the corner of Mason Mount under his crossbar.

After both Gabriel and Romelu Lukaku came to both ends, Andreas Christensen’s foul cleared Eddie Nketiah, and the Arsenal striker made no mistake about the low finish.

However, the athletes equalized after four minutes. This time Nketiah was a big man, giving Ruben Loftus-Cheek, his entry into Timo Werner. The German pulled it off his feet and his mis-hit low drive squeezed him inside Aaron Ramsdale’s nearby post.

Mount almost gave Chelsea a chance soon after, but his rape drive diverted. Bukayo Saka then cut the ball back to Nketiah after a jinking run, but the leading player conspired to hit his leg on his leg and it went out.

The half continued in the end, and a surprise attack produced Arsenal’s second goal. The move started with a cool nutmeg from Granit Xhaka, and the ball ended up running out of Saka. His world has found Martin Odegaard, who collapsed for the first time running Emile Smith Rowe.

Once again, however, it took Chelsea just a few minutes to find a quality player. Ben White fired the ball without pressure from Mount and Werner, and the front cross was cleverly converted by defender Cesar Azpilicueta, and the Blues survived a VAR update by playing poorly during the build-up.

Livewire Nketiah approached and straightened from the start, shooting his left foot past the post from the end of the box. Smith Rowe came out with his second mustache at the last minute of the season, creating space in the box with shiny footwork but it exploded at the top.

The game got tougher in the second half, but there was still room for a defensive error that led to another goal an hour earlier.

Azpilicueta delivered the ball into the middle of the pitch, and although substitute Thiago Silva made an excellent challenge for Nketiah, Malang Sarr was unable to cope with the loose ball and the Arsenal man was able to lift his second for the front.

Arsenal then settled into a defensive position, inviting Chelsea to try and tear it down. The closest was when Reece James’ ball was deflected by Ramsdale 25 minutes from time, and White produced a fine block to deny Alonso’s follow-up.

Saka closed the scoring at the last minute. Winger dropped the ball under a challenge from Azpilicueta referee John Moss who saw it as a mistake, and the England man came up with a penalty kick over Edouard Mendy.