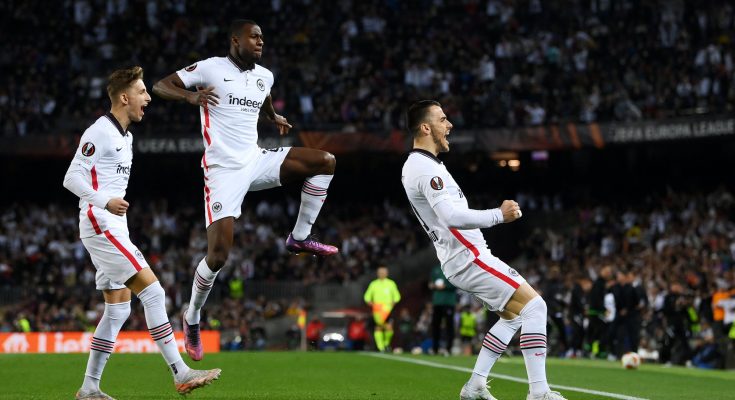 Barcelona crashed out of the UEFA Europa League quarter-finals with a 3-2 defeat at home to Eintracht Frankfurt on Thursday night, consigning them to a 4-3 aggregate loss despite a pair of stoppage-time goals.

Roared on by as many as 30,000 traveling fans squeezed into Barcelona’s Camp Nou, Frankfurt made a lightning start. As the ball tumbled out of the Catalan sky, Eric Garcia got a firm grip of Jesper Lindstrom, sending himself and the Dane to the turf to concede a third-minute penalty – the fourth spot-kick Barcelona have given away in their last two matches.

Filip Kostic duly converted to open the scoring on the night and give his side a 2-1 aggregate lead.

In a rerun of the first leg, Frankfurt loomed like a coiled spring around halfway, desperate for the player in possession to set off one of their pressing triggers – be it a backward pass or heavy touch – and fly forward.

In the final ten minutes of the first half, Sergio Busquets’ peripheral vision was snowed out by a tundra of white shirts swarming around the ball. Frankfurt robbed possession for the umpteenth time, but Rafael Borre produced a once-in-a-lifetime strike to double the lead, ripping a venomous effort past Marc-Andre ter Stegen from 25 yards.

Pierre-Emerick Aubameyang nodded a close-range header over the bar between Frankfurt’s first two goals before squandering an even better opening at the start of the second half. Yet, it was Frankfurt that had the lion’s share of the chances with just a fraction of the possession.

Despite their two-goal advantage, Frankfurt continued to commit well-stocked packs of players in their surges forward. While this bold approach continued to create chances for the visitors, it left yawning chasms for Barcelona to exploit, producing a mesmerizingly open tie.

However, Barcelona didn’t have the excuse of being caught in transition to explain away Frankfurt’s third. Watching on as the ninth-placed Bundesliga side worked the ball across the width of the pitch from a throw-in, Kostic had space to rattle in his second of the night, drilling a trademark scuttler into the far corner.

Busquets had a tap-in during the closing stages ruled out but got his goal with an effort thumped in during the first minute of nine added on, sparking a late flurry that thoroughly misrepresented the superiority Frankfurt exerted over their hosts for so much of both legs.

With the last kick of the game, Memphis Depay converted a 101st-minute penalty Evan N’Dicka’s collision with Luuk de Jong had caused. But there wasn’t any time left to take advantage of the Frankfurt defender’s red card as the German side now advance to a semi-final tie against West Ham.