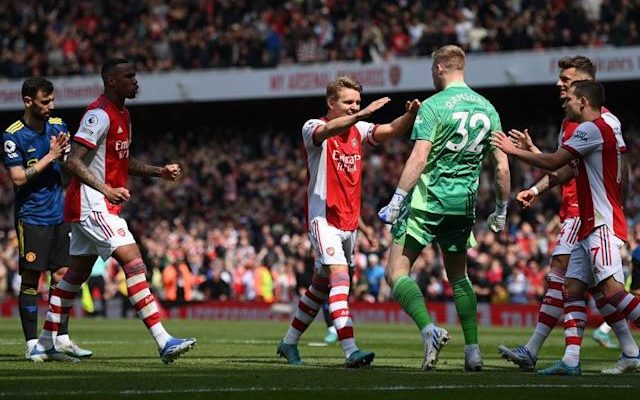 Manchester United’s hopes of playing UEFA Champions League football next season are surely over after losing 3-1 away to fellow top-four hopefuls Arsenal in a Premier League thriller.

Manchester United visited the Emirates hoping to respond to their 4-0 thrashing by Liverpool and, although their overall display improved, defensively was also unsatisfactory.

Nuno Tavares had Arsenal ahead early and Buka Saka’s penalty made it 2-0 just before Cristiano Ronaldo scored his 100th Premier League goal – or that was the title of the iceberg during the exciting first half.

The visitors started well in the second half and somehow failed to equalize, Bruno Fernandes missed a penalty and Diogo Dalot hit the post, and Granit Xhaka from the piledriver hit the hammer.

United made another slow start as Saka checked on David de Gea after two defenders missed the ball and Tavares hit a high to take the lead in the third minute.

The response from United was meaningful. They created many chances, hit a crossbar from Dalot, and were denied a penalty when Cedric Soares grabbed the box.

But Arsenal then increased their lead just after half an hour.

Eddie Nketiah had a disallowed goal due to an offside, however, Alex Telles was deemed to have fouled Saka just before the same VAR check and the denial player converted the resulting penalty.

They missed the chance to get a point where Fernandes hit the ball early in the second half – Ronaldo was denied the second goal offside.

Dalot also hit the post with United’s next attack and Arsenal used a brace in the 70th minute when Xhaka blasted De Gea from 30 yards to win.