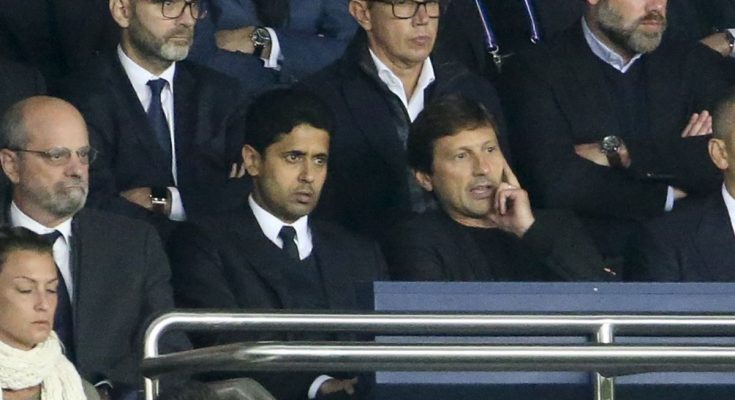 Paris Saint-Germain owner Nasser Al-Khelaifi had to be forcibly removed from the Santiago Bernabeu tunnel after trying to face a referee in a 3-1 defeat on Wednesday against Real Madrid, according to reports.

PSG are outraged by the referee’s failure to blow a foul on goalkeeper Gianluigi Donnarumma in the run-up to Real’s equalizer. Karim Benzema pressured the stopper to make a mistake and the VAR was satisfied that he did not use too much force to do so.

Al-Khelaifi, however, was not happy.

According to Movistar, the owner of the PSG rode to the stadium looking at the referee’s dressing room and was seen hitting the walls trying to force his way into the room to confront officials.

Al-Khelaifi reportedly had to be removed by security guards after he refused to lie.

“I feel very unfair, thanks to a goal conceded,” said manager Mauricio Pochettino after the loss. “It is an obvious mistake from Benzema to Donnarumma.

“Our mood changed after that and we were very exposed. It was a big impact because we were the best team in the game. We were better in the 180 minutes of football. Real Madrid were not beaten 1-1 by us.”

“Feeling a lot of injustice, thanks to a goal scored. It’s a clear mistake from Benzema to Donnarumma. The mood has changed and it’s very expressive. nothing at 1-1 and up with everything “.

The manager continued: “It was not a mistake [from Donnarumma] because it was a clear mistake. I have seen it 30 or 40 times in all angles. It was not the goalkeeper’s fault, it was a mistake.

“The smallest details are calculated and the VAR has never seen a deadline error. There has been a negative impact between both teams and the crowd. We have been in control of the game until then.”

As for Benzema, he was not in a position to make fun of PSG.

“I did nothing wrong,” he told RMC Sport. “He took too long, I pressed him and he lost the ball.”