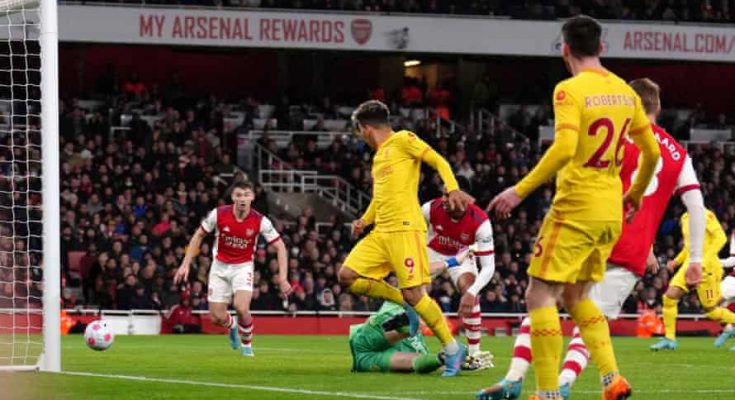 Jamie Carragher believes Liverpool can continue to win the Premier League title with Manchester City, following their 2-0 win over Arsenal on Wednesday.

The Reds advanced to City’s point one point after goals from Diogo Jota and Roberto Firmino scored three points at the Emirates Stadium.

Since the 2-2 draw with Chelsea in January, Jurgen Klopp’s side have won nine league titles, putting their game in City in April as a possible winner.

Reflecting on the match, Carragher believes the Premier League title is yet to be won while working as a Sky Sports inspector: “At 50-50, due to circumstances, the game is at the Etihad.

“This is the first time I’ve heard that Liverpool can win the league at any time this season. I’ve been in City before the ball was kicked.

“That Chelsea game, 2-2, when Liverpool after that game found themselves 11 points adrift of Manchester City – and Graeme [Souness] in the studio said Liverpool were still in the race – I thought he did well.”

Since Liverpool’s draw with Chelsea, City have lost just one of their last eight league games – losing 3-2 to Tottenham in February, although a 0-0 draw at Crystal Palace on Monday allowed the Reds to do another.

Given the level of the two competitors, Carragher believes the title race is less than Liverpool’s ability to put pressure on their current form, rather than immersion in City.

“Man City are not in bad form or have lost a lot of games or lost a lot of points. Because these teams are so good now, drawing a game just sounds like a loss,” he added.

“We are looking at the two best teams we have ever seen in the Premier League and draw is now a defeat. Drawing now is like the end of the world because you expect these teams to just win.

“I feel like the signing of [Luis] Diaz, not just as a person but what he did for Liverpool. What Liverpool took off on the bench [against Arsenal] is much better than the year they won the Champions League [2018-19] and the year they won in the league [2019-20]. “