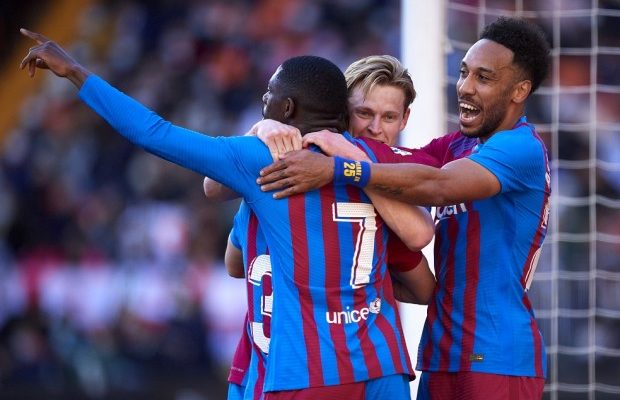 Pierre-Emerick Aubameyang got off the mark for Barcelona with a brace as they blew away Valencia at the Mestalla on Sunday.

The arrival of January helped his team to do an excellent and stylish job as they jumped back over Atlético de Madrid and Villarreal to advance to the top four of LaLiga.

He got the first one after 23 minutes, following a dynamic world from Jordi Alba before touching one to put himself in the box and hit the ball past Giorgi Mamardashvili and into the net.

Alba took part for the second time, producing a rolling back over the defender’s defense for Ousmane Dembélé to reach the finish line, and the Frenchman put the ball on the plate for Frenkie de Jong to hit home.

Aubameyang finished his goal 7th minutes before the break, using another high-profile team to return home from within four yards after Gavi found him.

José Bordalás’ side thought they had got another one just before Carlos Soler’s volleyball break but the VAR review led to the goal being disallowed after the ball was over when the goal was scored.

They managed to bounce back for 7th minutes in the 2nd half and it was Soler again, this time with his powerful head from 10 yards out as Valencia found their way back into the game.

But their hopes finally faded in the middle of the second half when Pedri hit a high point on the edge of the area opposite Omar Aldrete on the way in.

It’s three wins in the last four for Barça while Los Ches remain in 12th.