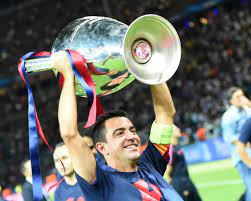 New Barcelona coach Xavi Hernandez has touched down in Spain for his emotional return to Camp Nou.

After a deal with Qatari Club Al-Sadd was reached on Friday, Barcelona were kind enough to wait until the early hours of Saturday morning before confirming Xavi as their head coach. Shortly after the announcement, Xavi hopped on a flight from Qatar to Spain

Barca president Joan Laporta is already planning for Xavi’s first transfer window in charge and is understood to have made plans for 3 new signings.

Among those on the wish list are former Villarreal striker Cedric Bakambu, now of Beijing Sinobo Guoan in the Chinese Super League, and Bayern Munich winger Kingsley Coman.